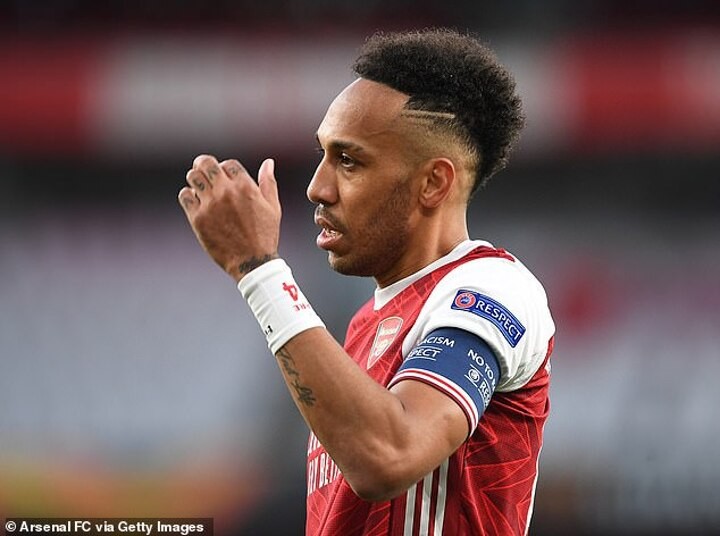 Pierre-Emerick Aubameyang has issued an emotional apology to Arsenal fans for the team's failings this season, both domestically and in the Europa League.

The Gunners have endured a miserable campaign and look set to miss out on a European placed finish this season.

Mikel Arteta's squad were holding onto the lifeline of potentially winning the Europa League in order book a place in next season's Champions League competition, but failed to do so after being eliminated by Villarreal and former boss Unai Emery in the semi-finals.

Now, with the future looking bleak and large sections of the fanbase disillusioned with the ownership, Aubameyang has taken it upon himself to come forward and speak openly to the fans.

Writing in his captain's notes for Arsenal's official matchday programme, the Gabon international first focused on the recent loss to Villarreal, during which the Gunners peppered their opponents with chances in the second leg but drew 0-0.

Aubameyang himself hit the woodwork multiple times, but Arsenal were eliminated after the 2-1 first leg result in Spain.

The striker wrote: 'We struggled to find our rhythm in the first half and didn’t give Villarreal enough problems

'And when we had a chance, the luck wasn’t there for us, when I hit the post with the volley and then the header in the second half.

'We are really upset about going out of the competition at this stage, for ourselves, for the club and most of all for you the supporters.'

Aubemeyang then turned his attention to the season collectively, admitting the players can now only apologise for not delivering the expectations of the fans.

'It’s been such a difficult season for fans and we desperately wanted to give you something positive this season – I’m just so sorry we couldn’t do it for you,' he added.

Arsenal fans remain united in their desire to force the Kroenke family to sell the famous club this summer in order for a new era to be brought in.

Arsenal fans protested in their thousands before the Gunners' league game with Everton on April 23 and continued on Thursday amid Spotify owner Daniel Ek's plan to bid for Kroenke Sports Entertainment's Premier League side.

Messages on some of Thursday's banners included, 'Kroenke You Mug, Get Out Of Our Club', 'We Want Our Arsenal Back' and 'We Need Someone Who Gives A S***'

Swedish businessman Ek has brought together Arsenal legends Thierry Henry, Dennis Bergkamp and Patrick Vieira to help him with his bid, with reports claiming the Kroenke are valuing the club at £1.8billion.

The Kroenke family issued a statement after the Everton protests that they are not entertaining the idea of selling Arsenal, though it has been revealed the Premier League club have effectively been up for sale for the past two years.

Arsenal all-time record goalscorer Henry says the Spotify founder, who claims to be an Arsenal supporter, wants to improve the fans' involvement in the upper echelons of the club.