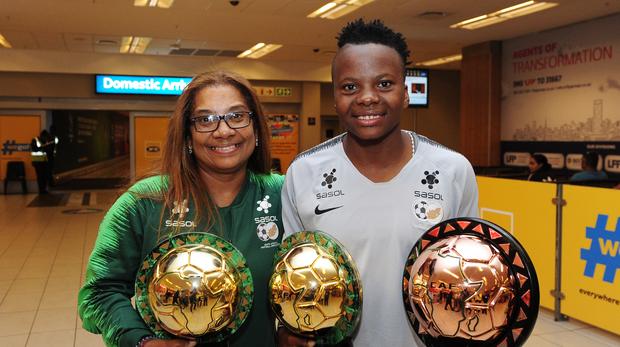 One of the much-anticipated events on the South African political calendar is the annual State of the Nation Address (SONA).

While socialites and fashionistas swoon over the fashion exhibited by politicians and invited guests, others will be looking forward to what the event is actually about: President Cyril Ramaphosa’s view on the state of South Africa since he took office, as well as his plans for the country in the foreseeable future.

The Presidency also makes use of the opportunity to invite members of the public who have been in the forefront of their industry to attend to event.

Two of sports trending characters in recent times were added to the Presidency's guest-list for the 2019 SONA.

Banyana Banyana coach as well as forward Thembi Kgatlana made the headlines in January this year when they were named the Confederation of African Football (CAF) Coach of the Year and Player of the Year respectively. Kgatlana also received the CAF award for Goal of the Year.

“2018 has been an amazing year, and so far 2019 has started with a bang not just for me but Banyana Banyana. What a better way to kick start this with an invite to one of the most sought-after events of the year.

I really appreciate this honour of being at this prestigious gathering. Thank you very much to the President,” said Ellis on the Safa website.

The Banyana coach also recounted a telephone call received from President Ramaphosa when he congratulated the team following their victory at the 2018 Women’s AFCON in Ghana.

“This also comes hot on the heels of the President calling us personally and wishing us well ahead of the final of the 2018 Women’s AFCON in Ghana. Also, this is just after we recently had a tour of parliament while in Cape Town where our guide was telling us what transpires around the precinct, in particular about the SONA.

"I feel truly blessed and humbled.”

Ellis will unfortunately attend the SONA alone as Kgatlana has had to decline due to  prior club commitments on the day.

“On a different day, I would not have missed this for the world, but there are some pressing issues regarding my club that I have to attend to and it is not clear how long they will take, so unfortunately I will have to decline the invite.

But thank you to the State President for the invitation, I am truly humbled by this gesture,” said Kgatlana.