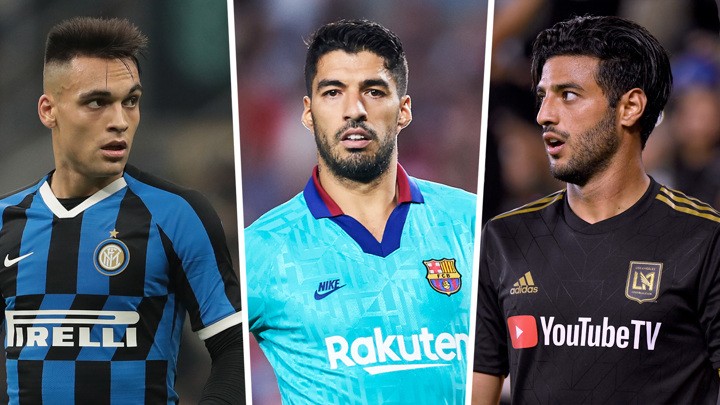 Lautaro Martinez and Carlos Vela are among the attackers Barcelona are considering as they look to sign a replacement for the injured Luis Suarez.

The Uruguayan striker has been ruled out for four months after having an operation on a knee injury that flared up again during his side's Supercopa de Espana semi-final loss to Atletico Madrid in Saudi Arabia on Thursday.

The Catalan side were hoping to avoid dipping into the transfer market in January but without adequate cover for the 32-year-old in the squad, they are forced to start the hunt for new options.

Although the Camp Nou outfit need a quality attacker to aid their La Liga and Champions League challenge, they cannot afford to spend big this winter.

Their financial situation means that one of their top targets, Lautaro, may be out of their reach at this point.

Barca are said to have made the Inter star their top target, but were planning on waiting until the summer to launch a bid.

The Argentina international's €111 million (£95m/$123m) release clause is only active for two weeks in July, meaning Barca must try to talk Inter into a fair deal, but the Italian club will not be interested in letting one of their star players leave in the middle of the season while they remain in contention for the Serie A title.

LAFC star Vela was linked to a Camp Nou switch last January and his name has been mentioned again in recent months.

The Mexico international has said many times that he would like to return to the Spanish top-flight and he already has a great relationship with Barca star Antoine Griezmann.

He could be the only option available to the Spanish champions due to his experience, but it will take a big bid to convince the MLS side to let him go.

Also on the club's list are Paris Saint-Germain striker Edinson Cavani and Paco Alcacer, who left Barcelona to become a sensation at Borussia Dortmund.

However, the strained relationship between the two clubs will make any pursuit of Suarez's Uruguay team-mate difficult, while Alcacer may be reluctant to go back to the club he failed to impress during his initial two-year spell there.

Alcacer is open to playing in Spain again, though, and he looks set to fall down the pecking order in Germany after his side bought Erling Haaland from Red Bull Salzburg this month.

Barca will try to offload some players in January, such as Inter target Arturo Vidal, to finance their bid for a new attacker but their current options are few and expensive. It remains unclear who they will sign, but it is obvious they need someone.