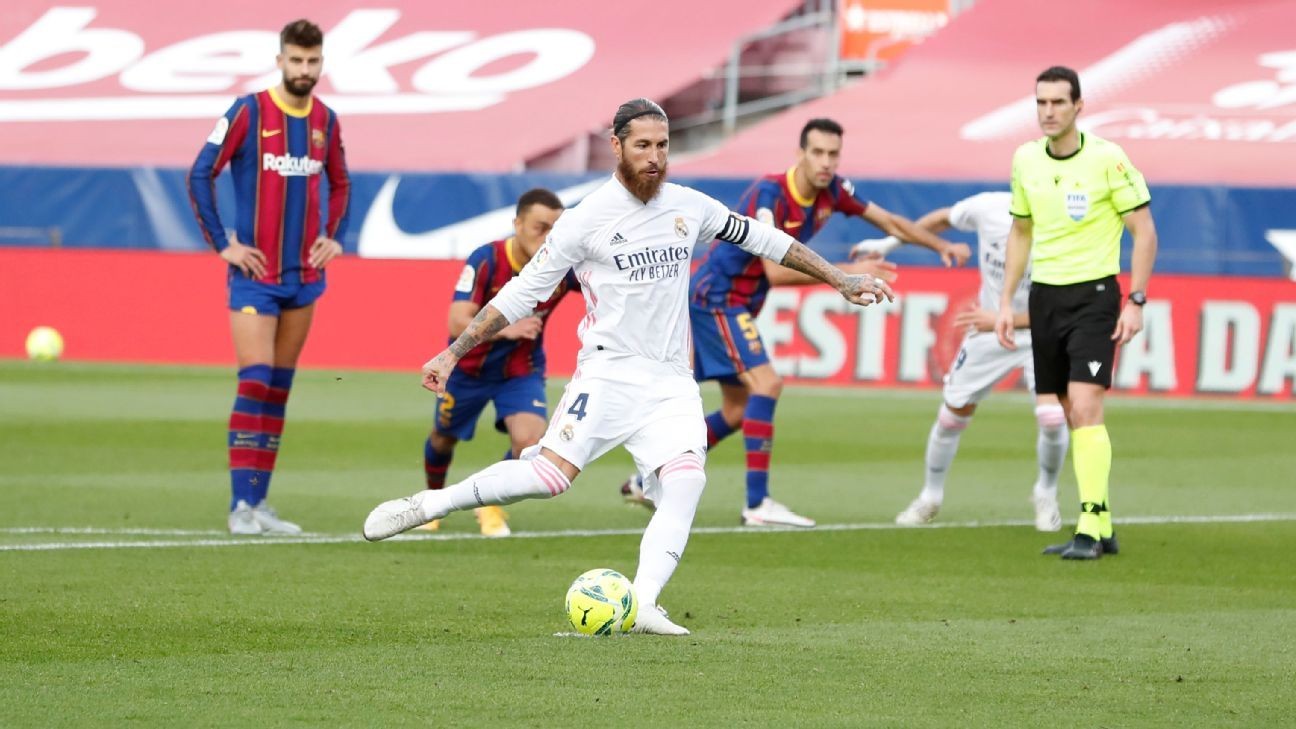 Barcelona have launched a tirade against the implication of VAR in Spain, accusing it of benefitting their "direct opponents" in a nod towards Real Madrid after Sergio Ramos's controversial penalty in Saturday's El Clasico.

Referee Martinez Munuera awarded Madrid a spot-kick after reviewing the pitch side monitor following Clement Lenglet's shirt pull on Ramos. Ramos scored the penalty to make it 2-1, with Madrid going on to win 3-1.

Barca coach Ronald Koeman slammed the decision after the game and moaned that his side have not benefitted from a VAR decision all season. He cited several occasions when he felt VAR should have intervened in Barca's favour, including a foul on Lionel Messi against Sevilla which wasn't given as a penalty.

"The board reiterates its confidence in VAR as a technology to assist referees with their work but, at the same time, expresses its absolute disagreement with regard to the criteria used for its application and interpretation in recent months," a statement from Barca said on Monday.

"The board considers that, in the cases of identical or very similar game situations, VAR has not upheld the essential criteria of ethics and fairness, which has had a serious negative impact on FC Barcelona and has benefitted its most direct opponents.

"It is public knowledge that other clubs in La Liga have made public statements on the same issue.

"FC Barcelona urges the Spanish Football Federation [RFEF] to take immediate action, with the collaboration of the La Liga clubs if it sees fit, to unify the criteria of interpretation and application and put an end to a situation that is damaging the image and credibility of what we consider the best league in the world."

Barca's VAR complaints stem back to last season. After a penalty wasn't given in Gerard Pique's favour against Real Sociedad, the club wrote to the RFEF to request clarification on how the technology's criteria.

Their frustrations with its use have risen since football returned in June following the three-month lockdown in Spain caused by the coronavirus crisis.

More than anger at decisions not going in their favour, sources at the club say there's a feeling that Madrid receive favourable treatment -- as alluded to in Monday's statement.

President Josep Maria Bartomeu says the club will study the audio of how the match officials arrived at the decision to award Madrid's penalty on Saturday.

A report in Diario Sport says the linesman advised the referee that it should not be a penalty because Ramos had first fouled Lenglet. However, the referee has the final say and he reached the decision after re-watching the incident.

"We will study the audio and take the necessary action to defend Barca's interests," Bartomeu said.