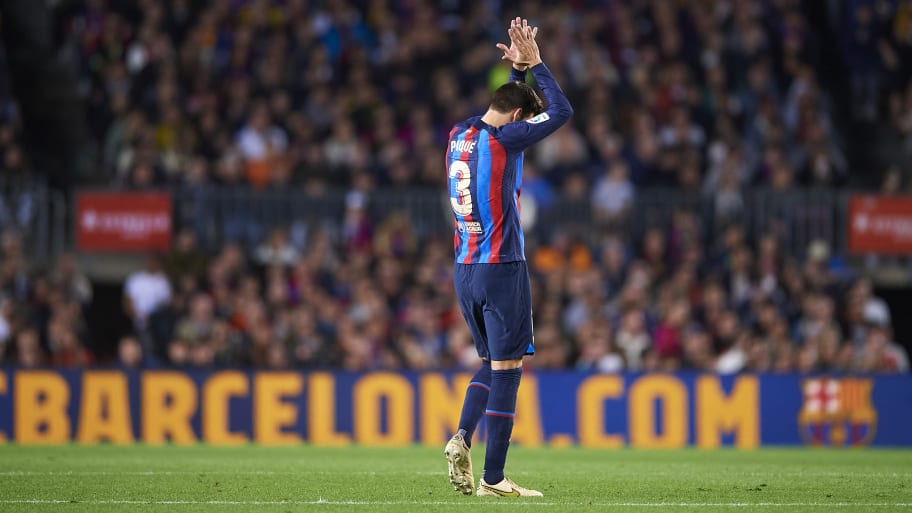 Gerard Pique signed off from professional football with a win and a clean sheet as Barcelona comfortably saw off Almeria 2-0 on Saturday.

Much of the pre-match coverage had been dedicated to Pique, who shocked the football world this week by announcing he would retire after their next league game.

In truth, one could be forgiven for thinking this was a testimonial and not a competitive league fixture, with the visitors offering little to no threat as the Blaugrana saw the game out in cruise control.

Barca were in control from the word go and were handed an early chance to take the lead when Kaiky handled Ferran Torres' header in the box. The referee saw nothing wrong with it, but VAR intervened to award the penalty.

Shockingly, Robert Lewandowski was unable to capitalise as he dragged his penalty wide, offering a reprieve to the visitors.

Barca continued to dominate throughout the first half, with Almeria unable to register so much as a shot until the half-hour mark when they spurned a golden opportunity to take the lead.

Largie Ramazani pounced on a pass intended for Pique and found himself through on goal. However, the Belgian was unable to find a way past Marc-Andre ter Stegen, who rushed off his line to make the save.

Moments later at the other end, Kaiky was at the centre of the action once again - this time for the right reasons, as he made a crucial intervention on his own goal line to stop Torres' shot from going in.

Almeria made it to the break without conceding, but the hosts returned after the break with a point to prove and quickly put themselves in front.

Sergio Busquets unlocked the away side's defence with an incredible line-breaking pass, putting Ousmane Dembele through to dribble past two players and slot home.

Dembele could have had a second goal shortly before the hour mark, but simply took too many touches after he had rounded Fernando Martinez and gave the goalkeeper the opportunity to recover.

However, it only took a few minutes for Barca to double their advantage; Frenkie de Jong stabbing home from close range after Martinez had saved from Ansu Fati.

As the game headed towards its conclusion, Xavi gave Pique a chance to feel the love of the Camp Nou crowd one last time when he substituted the defender for Andreas Christensen.

Visibly emotional, Pique hugged each of his teammates as he left the pitch to a standing ovation from the Barca faithful.

This was far from a classic match - in fact, it might well have been the most forgettable of Pique's entire career - but this was still a momentous occasion in modern football as one of the finest defenders ever to play the sport bowed out in style.

GK: Marc-Andre ter Stegen - 6/10 - Not the busiest day Ter Stegen will ever have, but the German stepped up when called upon to make a big save from Ramazani.

RB: Alejandro Balde - 7/10 - Balde might not be a right-back by trade but he's taken to his new role wonderfully. Admittedly, he'll face sterner tests than this one.

CB: Gerard Pique - 7/10 - Pique's 616th and final game in a Barca shirt was a rather low-key affair, leaving him with very little actual defending to do. Nice to bow out with a clean sheet though.

CB: Marcos Alonso - 6/10 - Chelsea fans will have raised an eyebrow when they saw Alonso starting at centre-half. In truth, he was fine, although a more established central defender could probably have kept the ball moving with fewer touches.

LB: Jordi Alba - 7/10 - Combined well with Torres down the left flank and helped to create the second goal with a dangerous cross.

CDM: Sergio Busquets - 7/10 - It was Busquets' delightful pass that finally broke through Almeria's defence in the second half, playing Dembele through to score. A solid game from the veteran midfielder.

CM: Frenkie de Jong - 8/10 - A solid display from De Jong was turned into a good one when he pounced on Martinez's parry to make it 2-0.

CM: Pedri - 7/10 - Almeria's tightly-packed defence made it hard for Pedri to create much of note, but he was still calm and collected in midfield throughout. Almost scored in the first half, too.

RW: Ousmane Dembele - 8/10 - After a slightly chaotic first-half display, Dembele came to life after the interval with a wonderful run and finish to open the scoring.

LW: Ferran Torres - 7/10 - Much maligned for his performances this season, Torres was arguably Barcelona's best player while he was on the pitch. Offered a constant threat down the left flank and even won the early penalty.

ST: Robert Lewandowski - 5/10 - It was just one of those days for Lewandowski, with his penalty miss setting the tone for his performance as he continued to spurn good chances throughout the match.

SUB: Ansu Fati - 6/10 - Couldn't take his chances but caused problems for the Almeria defence with his movement.

SUB: Raphinha - 6/10 - The game was as good as over when Raphinha entered the fray and the Brazilian couldn't offer anything of note.

This article was originally published on 90min as Barcelona 2-0 Almeria: Player ratings as Pique bows out with a win.