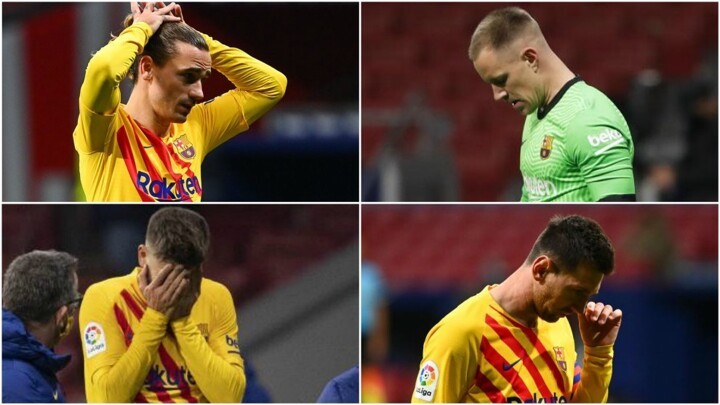 Barcelona started well against Atletico Madrid, with Ousmane Dembele causing the home side's defence problems in the first 20 minutes by bombing up and down the wing. It was similar story to other games, though, as the team's potency seemed to wither as the game went on.

The killer blow then came when a double error from Gerard Pique and Marc-Andre ter Stegen led to a goal for Yannick Carrasco, the only one of Los Rojiblancos' 1-0 win. What was most surprising was Barcelona's reaction after the break. Everyone expected Ronald Koeman's side to come out all guns blazing in the second half in search of an equaliser, but it was the home side who took control of the game.

Barcelona hardly troubled Jan Oblak in the Atleti goal and things went from bad to worse as Pique limped off with what could be a long-term injury. This could have serious ramifications for Barcelona in their attempt to win LaLiga Santander.

The team looked terrified and seemed to freeze up in reaction to the home side's opener. This kind of display will only get worse with the absence of the experience of Pique. The performance of Dembele and a couple of moments from Lionel Messi were the only positives to take from the game for the Blaugrana.

Antoine Griezmann went missing, Miralem Pjanic and Frenkie de Jong were well off the pace and Jordi Alba was unable to make an impact going forward. Barcelona are now nine points behind Atletico Madrid at this early stage in the season.

It is a worrying situation for Barcelona and, with Messi only occasionally producing dangerous moments and Griezmann performing well below the level expected of him, far more will be needed from the pair if this situation is to improve.

The injuries to Ansu Fati and Pique are also a big worry, with Fati currently the club's top scorer this LaLiga Santander season and Pique their best option in defence. The squad doesn't seem to have any kind of reliable replacement for either. Things aren't looking good and fans are concerned. They have good reason to be.