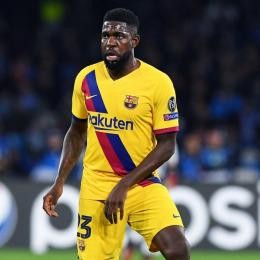 According to Sport, French international centre-back Samuel Umtiti (26), who might leave Barcelona FC after four seasons, have been targeted by AS Roma, Lazio, Napoli, and Torino, all interested in signing him on a loan spell. Playing for Blaugrana since 2016/17, former Lyon powerhouse, who after having achieved WC 2018 win went through a 2-year long dry spell, on a path riddled with injuries, is currently on a deal with Spanish giants until June 2023, and is earning a €3.9m annual salary, at the time. Umtiti was previously pursued by a bunch of major clubs, including Arsenal, PSG, Juventus, Inter Milan, and both Manchester giants.