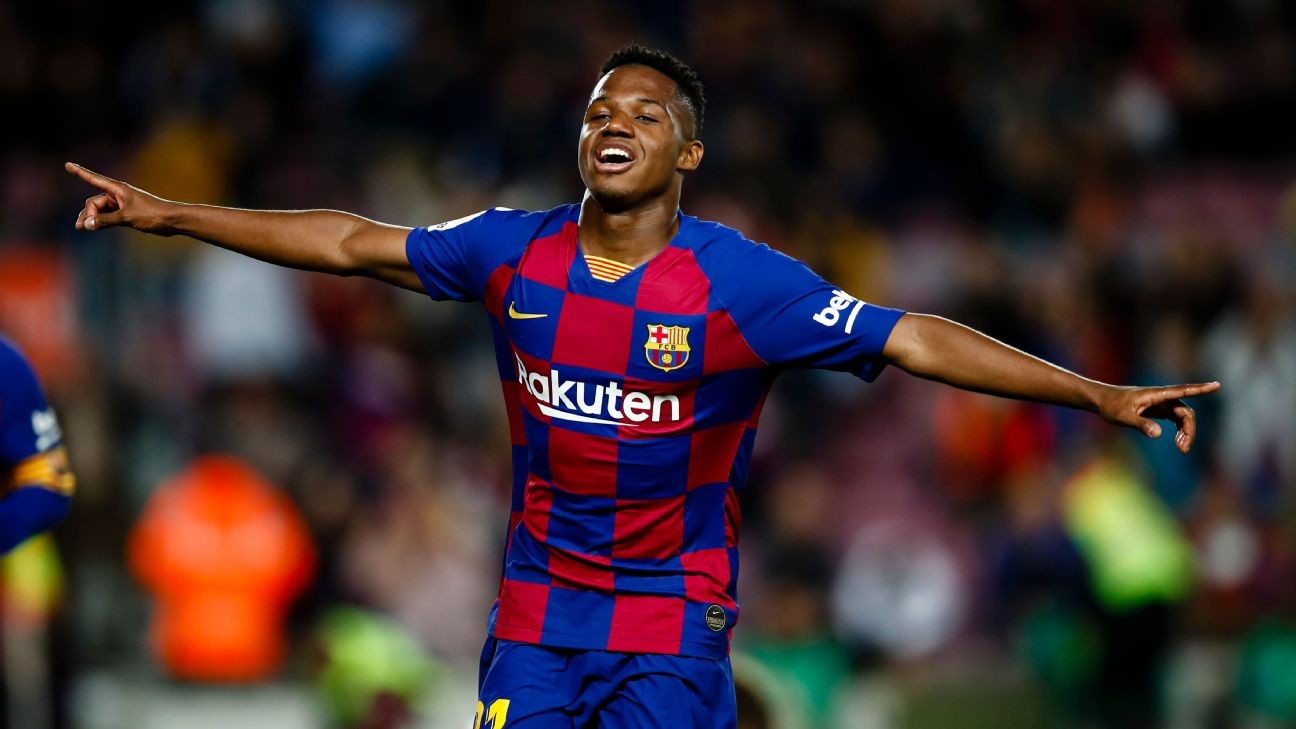 Ansu Fati was on the mark with two goals as Barcelona looked better than they have to date under Quique Setien.

Ansu opened the scoring at Camp Nou in the 30th minute when he latched on to a brilliant Lionel Messi pass to beat Aitor Fernandez in the Levante goal. The same combination led to Barca's second goal in the 31st minute as Ansu, aged 17 years and 95 days, became the youngest player to ever score a brace in La Liga.

An end-to-end second half saw chances missed at both ends before Ruben Rochina's effort deflected in off teammate Ruben Vezo in stoppage time.

Elements of the performance were the best seen under new coach Quique Setien so far. Barca are moving the ball quicker than they were under Ernesto Valverde, but they were also prepared to be more direct as they demonstrated on Sunday. Ansu's first goal came from one pass that split the Levante defence.

Furthermore, Ansu's goals will give the youngster a massive confidence boost. They were his first in the league since September, although he did score in the Champions League against Inter Milan in December.

Also, a word for Nelson Semedo. Was that his best performance in a Barca shirt?

Barcelona didn't have the control that Setien craves, which meant Levante were able to create chances. A mixture of Marc-Andre ter Stegen saves and poor finishing meant they didn't take advantage of them, though, until Rochina's late combination. Barca may not be so fortunate when they travel to Athletic Bilbao and Real Betis in the next week in the Copa del Rey and La Liga respectively.

Also, they will be without Pique at Betis. The defender picked up his 10th booking of the season and will sit it out through suspension.

7 -- Setien looks to have compromised slightly on his style ideals. Barca switched to a back four in their midweek cup win against Leganes and played the same system against Levante. While they relinquish some control, it seems to get the best out of a number of players.

GK Marc-Andre ter Stegen, 7 -- Made a couple of brilliant saves, with one from Hernani Fortes perhaps the pick of the bunch. Levante kept coming, though, and he was eventually beaten by the thinnest of deflections.

DF Nelson Semedo, 9 -- This may well have been his best performance in a Barcelona shirt. Rattled the bar following some Messi-like footwork and caused Levante problems down the right all evening. His recovery pace in defence is so important, too.

DF Gerard Pique, 6 -- Picked up a booking for a foul in the second half, his 10th of the season, so he will be suspended for next weekend's tricky-looking trip to Real Betis.

DF Clement Lenglet, 7 -- After an impressive display in the cup last midweek, the Frenchman made his first La Liga start under Setien. Not as courageous on the ball as Samuel Umtiti, but he was often more reliable at the back.

DF Jordi Alba, 6 -- His attacking output is limited with Ansu in front of him but he still gets forward at every chance. Was rarely troubled in defence.

MF Sergio Busquets, 8 -- Made a few mistakes but continued to look invigorated under Setien. Playing with real confidence with the ball at his feet.

MF Frenkie de Jong, 6 -- Improved as the game went on but still adjusting to a more advanced role. Still looks more comfortable when given the ball deeper.

FW Lionel Messi, 8 -- Set up both goals with two brilliant passes for Ansu. Will have been frustrated not to score for the second league game running, too: he followed up his 11 shots without netting against Valencia with 10 more here.

FW Ansu Fati, 9 -- Took his first goal really well and was celebrating again 60 seconds later, although Levante stopper Fernandez didn't cover himself in glory for the second. Had chances to complete a hat-trick -- including an audacious bicycle kick -- but had to make do with two in the end.

FW Sergi Roberto, 6 -- Came on for Griezmann to play ahead of Semedo on the right of the front three.

MF Arthur Melo, NR -- Didn't have time to make an impact on the game after replacing De Jong.

MF Riqui Puig, NR -- Given the final five minutes in place of Ansu.