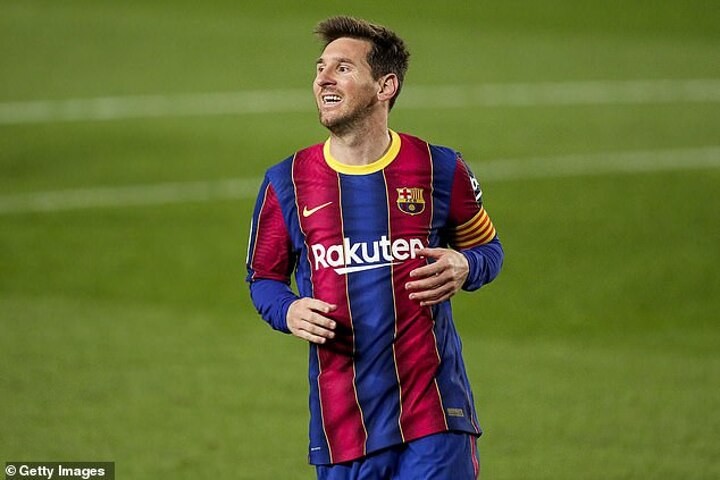 Barcelona are reportedly in a race to announce Lionel Messi's new contract in the first week of August in order for the Argentina star to play in their friendly with Juventus.

Messi has been a free agent since his £500,000-a-week contract expired on June 30 but has agreed to a 50 per cent pay cut in order to remain a Barca player for another five years.

But the Catalans' financial issues mean they need to balance their books and slash their wage bill in order to comply with LaLiga's strict slarary cap before they can register Messi as a player.

According to Spanish outlet Sport, the 34-year-old is scheduled to return for pre-season training on August 2.

But the pressure is on to get Messi's deal pushed through before their friendly with Cristiano Ronaldo's Juve on August 8.

The Catalans will take on the Serie A side in the Joan Gamper Trophy at the Nou Camp and the report claims Barca want to have the deal done in time for Messi to feature.

He told the club's official website: 'The player has always said he wants to stay on and we are making good progress with the negotiations.

'(Rafael) Yuste and (Mateu) Alemany are working very hard. What we all want is for Messi to stay at Barca. To stay for a lot of years and play alongside such talented footballers as Depay.

'We are very satisfied with the attitude being shown by both parties, which an operation like this needs. Leo is on holiday right now, but he has a whole team working to get him a contract that suits everyone.'

Along with Depay, Barcelona have also signed Sergio Aguero, Eric Garcia and Emerson Royal so far during the summer transfer window.

Laporta has insisted that their new additions can be registered despite LaLiga's salary cap restrictions.

'The players we are signing can be registered. We know about the restrictions, which come by cause of what we have inherited. It isn't easy but we are working hard with LaLiga.

'Alemany is doing an extraordinary job, so is Yuste and the secretary. We have to follow the rules. We are convinced we can reduce the payroll or find a formula that's acceptable to LaLiga.

'LaLiga is on our side and so is the president. He is the first person to want players like Memphis to be playing for Barça, but there are rules and we want to obey them.'

Messi and Ronaldo have had a long rivalry with the pair having competed for the Ballon d'Or over the last 14 years.

Ronaldo has won the award five times since 2008 while Messi has won six.

Barca have already seen five players depart this summer and more could follow.

Ronaldo's future is also uncertain with the Portugal star entering the final year of his Juve contract.