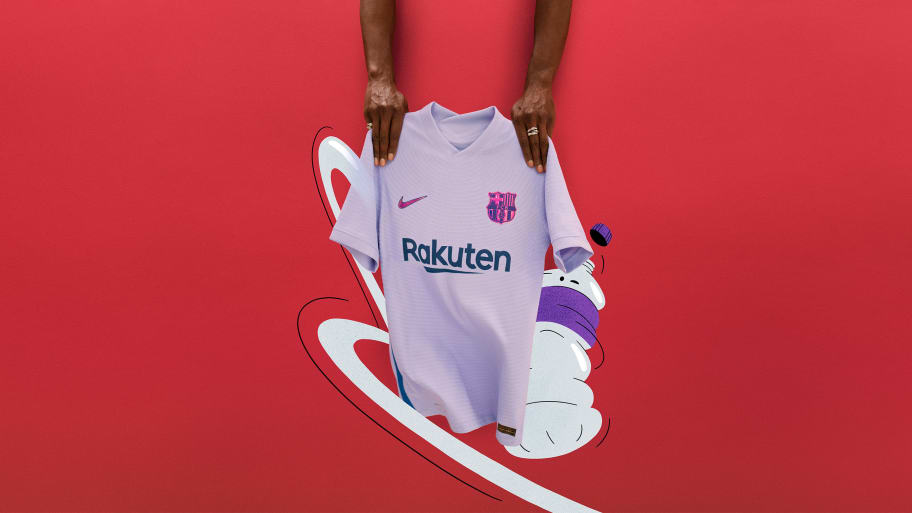 Barcelona have unveiled their new away kit for the 2021/22 season, which has been designed to promote women's empowerment.

The club have launched their new 'MORE THAN' campaign, which strives to help out the local community and prove that Barcelona live up to their motto of 'more than a club', and this new kit is their latest commitment to the cause.

Instead of using the famous blue and red colours from the home shirt, Barcelona have meshed the two together to create purple, which is commonly used to represent the fight for gender equality.

As an extra sign of Barcelona's commitment to their MORE THAN EMPOWERMENT cause, the shirt features both the masculine and the feminine version of the club's motto in stripes down either side of the shirt.

Down one side, you'll find a blue stripe with the masculine message tots units fem força (united we are strong), with the other side featuring totes unides fem força in a red stripe.

The design also features a monochromatic crest, which is designed to give off a different colour depending on the angle it is looked at, and there is a multicolour rainbow threat hidden within the shirt to add to the vibrant feel of the new design.

“I think our younger fans are going to love it, it’s so fresh and different from anything I’ve ever seen,” says Aitana Bonmati. “In every look, you find more intricate details and it’s the perfect uniform for representing this amazing club with its rich history.”

This year marks the 50th anniversary of what is considered as the first meeting of the Barcelona women's football club.

A group of pioneers first played at the Camp Nou back on Christmas Day in 1970 and went on to form the Barcelona team over the coming years, and some of those famous faces have been drafted in to help promote the new kit.

On top of the good cause, Barcelona and Nike have also ensured that the new shirt remains environmentally friendly.

As part of Nike's Move to Zero push, the new kits are made of 100% recycled polyester which comes from recycled plastic bottles, allowing kits to be produced with minimal impact on the environment.

The new Barcelona away kit is available on Nike.com between July 15 and 20, before arriving in retail stores later in the month.

This article was originally published on 90min as Barcelona show support for women's empowerment with new away kit for 2021/22 season.