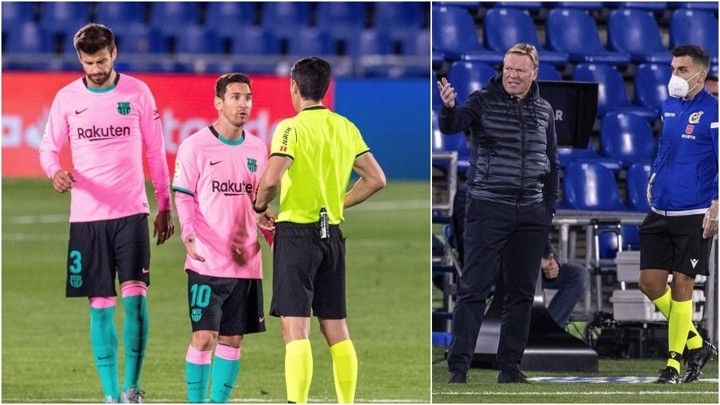 Barcelona didn't enjoy themselves on Saturday night as they fell to defeat against Getafe. Having witnessed Real Madrid lose to newly promoted Cadiz, Ronald Koeman's side failed to take advantage as Jaime Mata's penalty took the three points.

The coach did not hide after the final whistle and had several complaints about issues which he felt went against his team in a heated tie which involved several clashes, on the field and on the touchline.

Jose Bordalas and his Getafe team have their own unique style which is robust and disciplined and Barcelona couldn't handle it at the Coliseum Alfonso Perez on Saturday night.

One of the most controversial decisions was the penalty awarded for a foul by Frenkie de Jong on Djene Dakonam just before the hour mark, which Mata duly converted.

While VAR did not intervene for that penalty decision as De Jong came in from behind on Djene, it did review several decisions throughout the evening.

Koeman also complained about the constant stopping of Getafe, who looked to break up the tie and slow down any Barcelona momentum, with Allan Nyom at the very heart of it.

The former Leganes defender was lucky not to be sanctioned for an elbow on Lionel Messi and committed eight fouls, picking up a yellow card in the process.

After the game, Koeman confirmed that Nyom had been the topic of conversation as he spoke to Jose Bordalas and expressed his anger.

"I told him that Nyom has shown a lack of respect, he insulted me, he said two or three very ugly things which I won't repeat," Koeman explained in his post-match press conference.

"If you watch the game, the fouls, the cards, everyone can have an opinion.

"It's a complicated place to come, but we tried to play, to have rhythm, and they cut us off a lot. It made it difficult for us to have opportunities to score."

Koeman isn't the first coach to complain about Getafe and their style in recent years, but it did the trick to win three points against Barcelona.