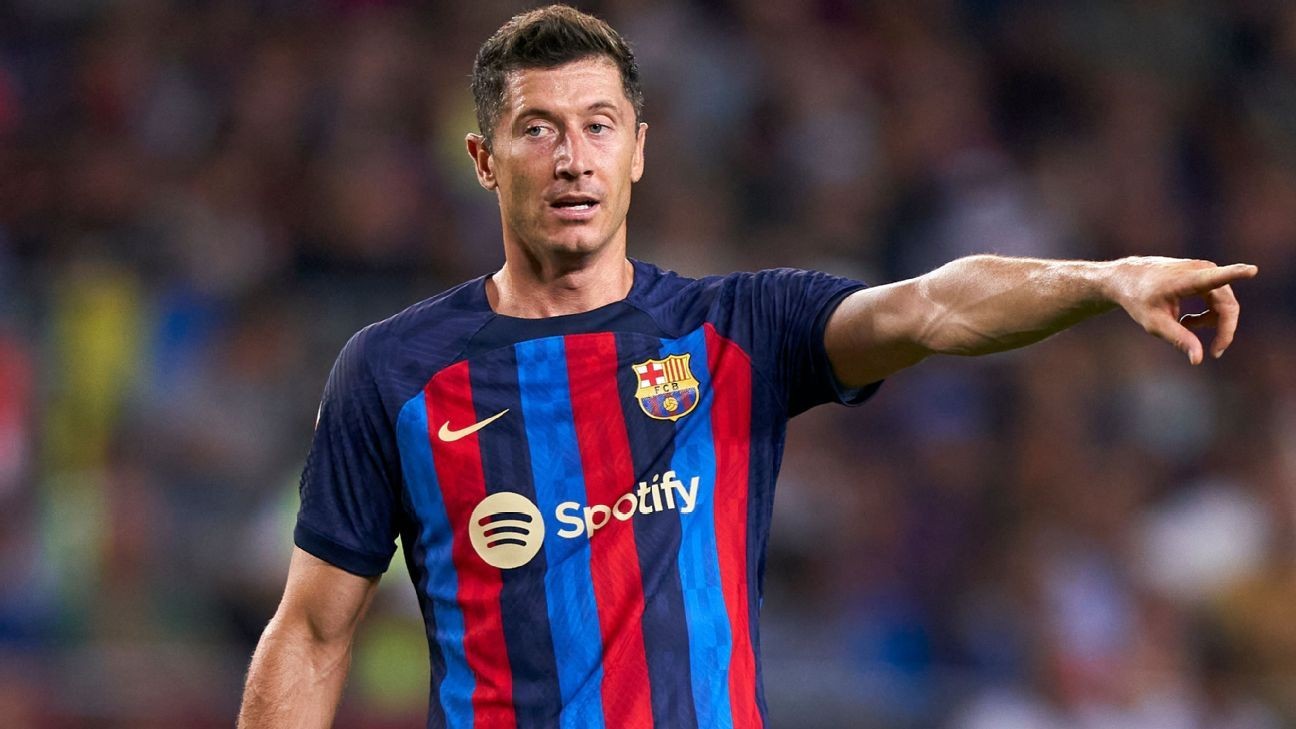 Barcelona are looking to Lewandowski to deliver in front of goal, and will hope his showing against Rayo isn't a sign of things to come. (Photo by Pedro Salado/Quality Sport Images/Getty Images)

BARCELONA -- Xavi's new signings couldn't make the difference against Rayo Vallecano in their season opener at Camp Nou, which ended 0-0. Barcelona dominated the game in possession and chances created, but Rayo held on to grind out a draw.

ESPN's Sam Marsden has the reaction from Camp Nou.

Barcelona's bright new future began with a stuttering goalless draw at home to Rayo Vallecano on Saturday. It was, at least, better than the two 1-0 defeats they suffered against the same opposition last season.

It was supposed to be different this time. Since losing to Rayo in April, Barca have spent over €150 million on new players. Three of their five new signings started here after most of them were registered with LaLiga just 24 hours before kick-off. Jules Kounde, though, watched from the stands. Barca do not have enough salary space to register the defender yet.

Robert Lewandowski has been registered and he led the line, flanked in attack by fellow new signing Raphinha and Ousmane Dembele, but none of them could find a way past Stole Dimitrievski in the visitor's goal. When Lewandowski did beat him early in the first half, the flag went up.

Substitute Franck Kessie also had a goal ruled out for offside, while Sergio Busquets and Dembele were both denied by Dimitrievski. When chances fell Raphinha's way, he missed the target.

The pre-game optimism of the 81,000 fans at Camp Nou turned to whistles in the second half as Dimitrievski time wasted at every opportunity. Barca's players also grew frustrated. Busquets was shown a late red card for a second booking.

There was almost a sting in the tail for the hosts, too, with Rayo carving their own chances. Luckily for Barca, goalkeeper Marc-Andre ter Stegen was in good form to ensure they didn't suffer a third straight defeat to Andoni Iraola's team.

Barca's attack may need some time

Perhaps it was unrealistic to expect Barca's new-look attack to click straight away. Xavi has incredible depth available to him but throughout preseason he has shown a preference for Lewandowski, Raphinha and Dembele. Ansu Fati, Ferran Torres, Pierre-Emerick Aubameyang and Memphis Depay are waiting in the wings. They may not all stay beyond the transfer window.

Raphinha shone in preseason but wasted his best chances against Rayo. Dembele blew hot and cold. Lewandowski tried to drive the team on, but nothing quite fell for him. There was no instant connection between the three. Substitute Ansu provided just as much as a spark when he came on, while Aubameyang saw a late chance cleared off the line.

It took until January of their first season together for Lionel Messi, Neymar and Luis Suarez to really take off. Let's see how quickly Xavi can knock this frontline into shape.

Rayo ended 12th last season in their first year back in the top flight and showed against Barca on Saturday that they are once again up for the fight despite having one of the league's smallest budgets.

Iraola is a fantastic young coach and he has some talented players, despite not having a penny to spend. Isi Palazon and Oscar Trejo were fun to watch at Camp Nou, but it was the team's shape and understanding which earned them the point.

That's three games in a row they have shut Barca out. Luis Suarez's goal in 2019 was the Catalan's last against Rayo. That's not down to luck. That's down to Iraola.

The home supporters were sick of the sight of him because of his time wasting, but his shot stopping earned Rayo a point. He made six saves in total on a memorable opening day for Rayo.

No one deserves too much criticism for Barca dropping points, but left-back Jordi Alba was perhaps the player furthest away from his best. He is usually such an integral part of his team's attack but didn't get forward enough or link well with those ahead of him.

Andoni Iraola has not lost to Barcelona during his time as manager of Rayo Vallecano.

Busquets was sent off during added time, his first sending off in a LaLiga match.

Sergio Busquets was sent off for a second yellow card after this play against Falcao. pic.twitter.com/D92kRdZ9Zl

Lewandowski could not find the back of the net in his first LaLiga match at Camp Nou.

Time is running out for Barcelona who have now missed a myriad of chances against Rayo Vallecano.

After the match: What the managers, players said

"I understand the disappointment, expectations are really high. We will have to analyse the game, improve and keep believing in the model of play. Rayo defended well. It was harder for us to create [chances] than usual. It's a shame because we wanted to show the fans that we're on a good path. It's disappointing, but we ask for patience." - Barcelona head coach Xavi

Barcelona: They travel to Real Sociedad on Aug. 21 before playing a friendly against Premier League champions Manchester City on Aug. 24, followed by a home LaLiga game vs. Valladolid on Aug. 28.

Rayo Vallecano: Rayo travel to Espanyol on Aug. 19, then host Mallorca on Aug. 27 before traveling to play Osasuna on Sep. 4.