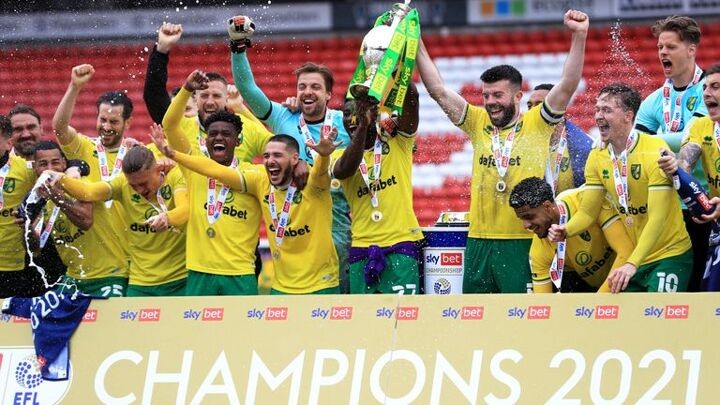 Norwich lifted the Sky Bet Championship trophy at Barnsley but missed out on setting a new club record of 30 wins in a league season.

The Canaries had to come back twice to secure a share of the spoils in a 2-2 draw following Cauley Woodrow and Conor Chaplin strikes for the hosts.

Emiliano Buendia grabbed Norwich's first equaliser with his 15th goal of the season and 20-year-old Adam Idah scored the second just two minutes after being hauled off the bench.

Norwich now head for the Premier League having been promoted to the top tier for a fifth time in 17 years, while Barnsley will meet Swansea in the play-offs with a point proving sufficient to lift them up to fifth place.

The Oakwell team enjoyed the better of the opening exchanges as Chaplin volleyed over from the edge of the box with the outside of his left boot.

Jasper Moon's 20-yard drive was then well held by Tim Krul following Callum Styles' left-wing delivery, while the Canaries 'keeper also punched away off his line after Chaplin's free-kick had taken a heavy deflection off the visitors' wall.

The Tykes' greater urgency told on 24 minutes when Carlton Morris dispossessed a dallying Andrew Omobamidele close to the away goal and the former Norwich forward kept his composure to square to Woodrow, who found an inviting net from eight yards.

Norwich's players and manager Daniel Farke railed at the officials, arguing Omobamidele had been fouled by Morris and that sense of injustice appeared to fuel a swift response as the champions drew level two minutes later.

In the best move of the half, Kenny McLean sent Max Aarons sprinting down the right flank and his precise cross was headed across goal into the bottom corner by Buendia.

But an undeterred Barnsley immediately got back on top with a long-range Woodrow effort drifting wide and Chaplin testing Krul from just inside the penalty box.

Morris also saw a shot on the turn deflected away from goal and the enthusiastic Woodrow missed the target on another couple of occasions, before Valerien Ismael's side forged ahead again on 41 minutes when Styles' cross from the left saw Chaplin direct a downward header past Krul from five yards.

Norwich might still have hit back before the break, but Todd Cantwell lifted a poor effort over after breaking through the right channel.

Cantwell made amends, however, nine minutes after the interval, unselfishly helping on Buendia's low delivery into the box to tee up Idah for a six-yard opportunity that he swept into the roof of the net for his second goal in three outings.

Barnsley again responded with spirit as Krul parried away a powerful Victor Adeboyejo shot and gathered a low Romal Palmer shot, but Jordan Hugill should have added a third visitors' goal when he rose unopposed to meet Mario Vrancic's left-wing free-kick only to miss the target.

On 83 minutes, Buendia was also guilty of a glaring 15-yard miss after his own clever footwork had crafted the chance.

It did little to dampen the celebrations on a wet afternoon in South Yorkshire, however, as Norwich still finished their campaign unbeaten in nine away games - their best run since 2015.