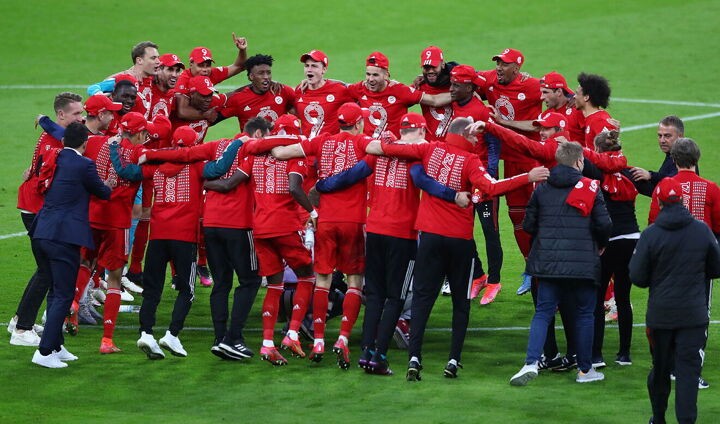 No one club rules their respective domestic league quite like Bayern Munich. The Bavarians had their ninth straight Bundesliga title wrapped up without even kicking a ball on Saturday as Borussia Dortmund beat RB Leipzig.

Expectedly, Bayern then went on to celebrate in style, hammering Borussia Monchengladbach 6-0 later in the day.

While Juventus were dethroned this season after a nine-year winning run of their own, not even Italy's Old Lady dominate their country like Bayern do, with Inter having won 19 Serie A titles and AC Milan on 18, compared to Juventus' 36. Then come Genoa with nine, ahead of Torino, Bologna and Pro Vercelli - each on seven.

Things in Germany are very different. Bayern have now won the title 31 times and Nurnberg are next on nine, but without a title since 1968. Dortmund have eight, and recently relegated Schalke have seven.

Dortmund managing to win back-to-back titles under Jurgen Klopp looks a more impressive achievement with each season that passes - having done so in 2010/11 and 2011/12. That was the first time since the mid-1990s that Bayern went two years in a row without ruling German football.

Earlier this century, Werder Bremen, Stuttgart, Wolfsburg and Dortmund themselves managed to beat Bayern to the odd title, but the giants swiftly came roaring back to reclaim what they see as theirs.

It's not easy to challenge Bayern though, and the smaller clubs perhaps aren't helped by the 50+1 model of ownership, as that pretty much guarantees that a smaller club can't be bought and backed to the point that they're able to compete.

That also means that the Bavarians are able to cherry pick talent from anyone that threatens them, as has been seen in recent years with their signings of Robert Lewandowski, Mats Hummels and Mario Gotze from that successful Dortmund team.

With things as they are in German football, it's hard to imagine that Bayern will ever be displaced at the very top.