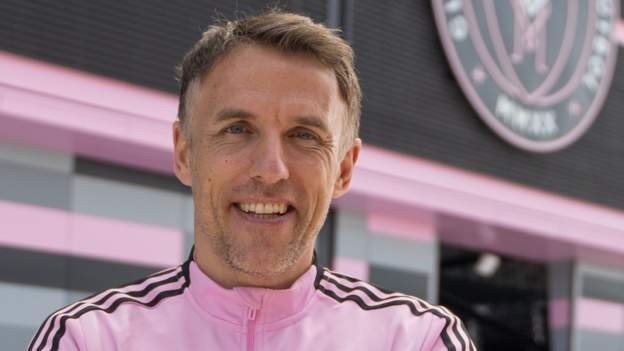 David Beckham says appointing Phil Neville as manager of his Major League Soccer side Inter Miami has "nothing to do" with him being his friend.

Beckham, 45, and Neville, 44, came through the ranks at Manchester United together before playing alongside each other for both United and England.

"We are running a serious soccer club here," said Beckham, who is one of four owners of the club.

"We hire people that we feel are best suited for the job."

Neville left his role as manager of England's women to take up the Inter Miami post.

He led the Lionesses to their first SheBelieves Cup title in 2019 and fourth place at the Women's World Cup later the same year, but results since that tournament have been poor.

England's struggles under Neville continued at the 2020 SheBelieves Cup, where a late defeat by Spain in the final match was their seventh loss in 11 games.

Beckham added: "My loyalty to Phil has always been there, because as a player I relied on him to keep making those runs by the side of me - I never gave him the ball because I thought I was a better crosser.

"But I knew he would keep on making those runs because he knew that was what was best for the team.

"He will make those decisions as a coach... and as a leader. That's why he is in this position, nothing to do with the relationship we have, the friendship we have, the loyalty we have to each other. He's the right man for the job."