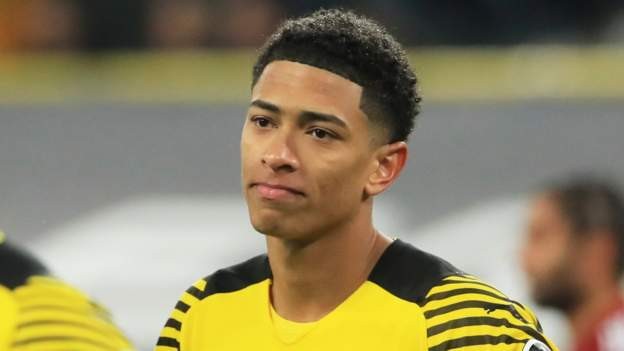 England midfielder Jude Bellingham questioned the appointment of Felix Zwayer as the referee for Borussia Dortmund's 3-2 defeat by Bayern Munich.

Zwayer rejected Dortmund's appeals for a penalty before giving their rivals a spot-kick for a Mats Hummels handball.

Robert Lewandowski stepped up to score Bayern's winner against his old club.

"You give a referee, that has match fixed before, the biggest game in Germany, what do you expect?" said Bellingham, 18.

Zwayer was banned for six months by the German FA after being embroiled in a match-fixing scandal in 2005.

Speaking to Viaplay,external-link Bellingham said: "For me, it wasn't [a penalty]. He [Hummels] is not even looking at the ball and he's fighting to get it and it hits him.

"You can look at a lot of the decisions in the game."

Dortmund boss Marco Rose was booked for his angry reaction when his side were denied a penalty and was sent off for a second caution for his protests after leaders Bayern were awarded theirs in the 77th minute following a lengthy VAR review.

Dortmund captain Marco Reus went down in the box after a challenge with Lucas Hernandez in the 54th minute and Reus said Zwayer should have watched it again on the VAR monitor.

"When you see the replay it looks really bad," said Reus. "It is a shame that he did not review that one."