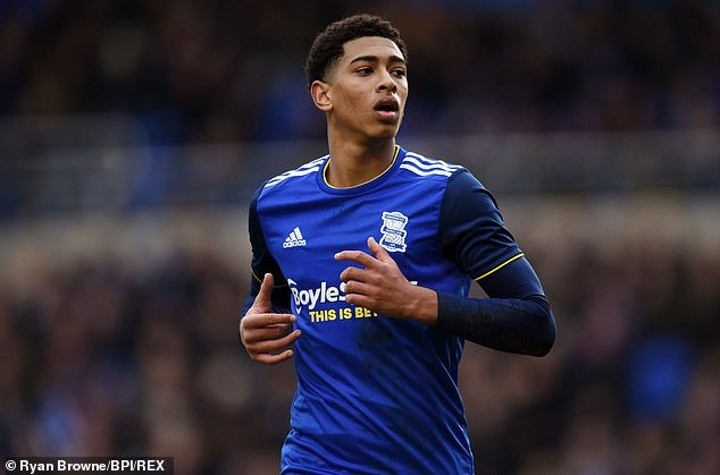 Jude Bellingham's former youth coach believes Manchester United would be a good fit for the Birmingham teenager who looks set for a big-money move this summer.

But the 16-year-old has been told to prioritise first-team football as he plots the next stage of his fledgling career.

Interest is high in the midfielder with United and Borussia Dortmund leading the way, but Sam Manoochehri, an ex-youth development coach at Birmingham City, who worked with Bellingham for four years, has warned him to be careful.

'Man United, it might be a nice fit for Jude, with a rejuvenated team, talk of Aston Villa's Jack Grealish going over there,' he told The Mirror.

'But Dortmund would also suit, the recent profile of players that have come through that system, the likes of Jadon Sancho. Jude would fit that mould too.

'And look at what's going on at Chelsea now. A lot of good young players in that team.

'However Jude has got to make sure that his next move, is to a club where he plays. If not, I don't think there is any problem with him staying at Birmingham.'

Rio Ferdinand backed United's pursuit of the highly-rated teenager this week, but warned his former club that spending £30million on him would be 'a gamble'.

'Jude Bellingham, huge talent, huge talent, really good-looking footballer in the way he plays, the balance he's got, the maturity at such a young age,' Ferdinand said during an Instagram Live.

'I want to see more but the price tag is phenomenal. £30million odd for a kid, for a 16-year-old boy, it's unbelievable.

'But it's the way of the world now and the way you've got to think about it, if you're paying £30m, if we keep him for 10 years it's money well spent.

'It's a gamble, it's an expensive gamble, but the kid to be playing in the Championship and doing what he's doing and looking the player he is, it's a gamble but a calculated one.'