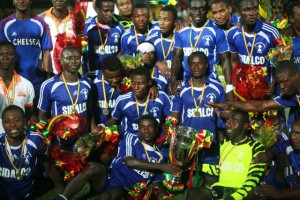 Berekum Chelsea will officially be crowned champions of the 2010/2011 Ghana Premier League season on Sunday at the Golden City Park.

The Blues will play dethroned champions Aduana Stars in a coronation match.

Huge celebrations have been lined up for the official match to hand over the trophy to the side.

The club's youth side will also present the 2011 Yokohama Cup won in Germany last month to the fans.

The senior will also display the 2011 President's Cup trophy won early this month against Asante Kotoko.

The club finished 10 points above second-placed AshantiGold in their first league title in since joining the elite division.