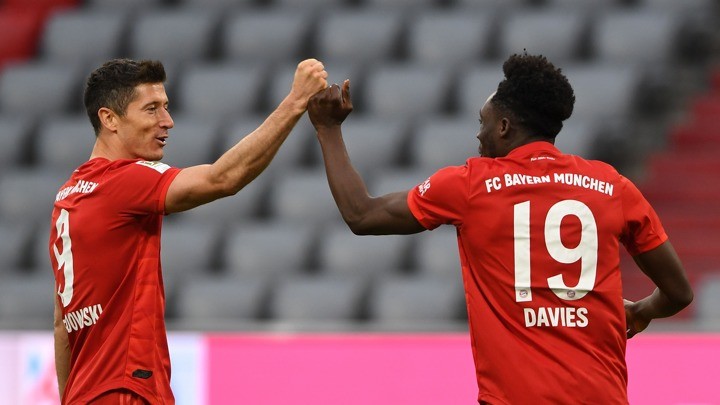 Bayern Munich travel to Bayer Leverkusen this weekend with Hansi Flick's side closing in on their 30th Bundesliga title.

The Bavarians need three wins from their last five league games to be crowned champions once more, yet Saturday sees them visit a side who beat them earlier this season.

Leverkusen recorded a 2-1 victory at the Allianz Arena back in November and Peter Bosz's men will be looking for another three points as they aim to keep up their push for a Champions League berth.

Bayern have midfielder Thiago Alcantara back in contention after missing the last three games with an adductor injury, although defender Lucas Hernandez is a doubt having come off at half-time in the weekend win over Fortuna Dusseldorf. Long-term absentees Niklas Sule and Philippe Coutinho remain side-lined.

Leverkusen for their part could welcome back Kevin Volland to the starting eleven. The striker has not featured since February with an ankle injury but was on the bench at Freiburg last weekend and could be close to a return to full fitness.

Leverkusen's strong form in 2020 has been down in large part to their scoring form with the side netting in every Bundesliga game this year.

Indeed, the side from the BayArena have only failed to score in four of their 29 league matches this term and against Bayern they have netted in each of their last six meetings in all competitions.

The Bavarians, meanwhile, can consistently be relied upon to find the back of the net, being the top-scoring side in the division and averaging three goals a game.

Furthermore, this game is a meeting of two of the most in-form forwards in the Bundesliga with top scorer Robert Lewandowski aiming to add to his tally of 29 goals, while Leverkusen's Kai Havertz has netted five goals in four games since the restart.

There have been at least four goals in nine of Leverkusen's last 13 games making this an attractive selection for Saturday's clash.

You can watch the Bundesliga live on the go with your iPhone, iPad or Android device through your bet365 account. All you need is a funded account or to have placed a bet in the last 24 hours to qualify.

Odds correct at the time of writing. Please gamble responsibly.