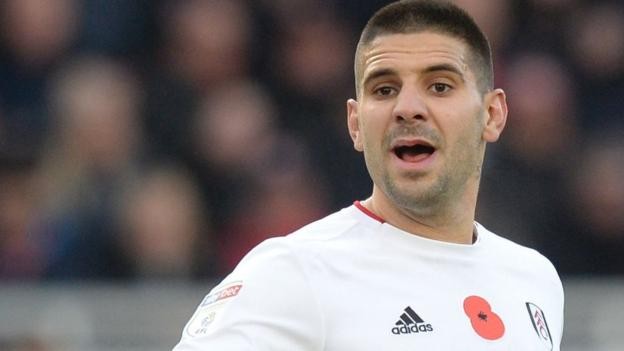 Aleksandar Mitrovic is the Championship's top scorer this season - but he has not scored on either of his two previous trips to St Andrew's with Newcastle United and FulhamFollow Saturday's EFL action from 12:15 GMT

Birmingham City are without captain Harlee Dean for the visit of Fulham as he starts his three-match ban for his red card in the 4-2 defeat at Cardiff.

New striker Jeremie Bela, who left Spanish side Albacete to join Blues, has received international clearance but has not played since June.

Fulham have goalkeeper Marek Rodak back from his one-game ban for his red card in the goalless draw at Middlesbrough.

Full-back Joe Bryan is not expected to feature having been forced off early on against Hull following an awkward fall, while midfielder Harry Arter continues to be assessed after missing the past three matches with an unspecified injury.

Blues start the day in 12th, a point behind eighth-placed Fulham - and just eight points off leaders West Bromwich Albion.

Birmingham City have won four of their past six league meetings with Fulham. Fulham have not failed to score in three consecutive Championship games since January 2015. Current manager Scott Parker started all three of those games. Only Cardiff City (17) and Preston North End (20) have won more home Championship points than Birmingham (16) this season. Blues have won their past three home league games - they have not won four in a row since under Gary Rowett in December/January 2016. Fulham have had 275 open-play sequences of 10 or more passes in the Championship this season - 132 more than any other team.