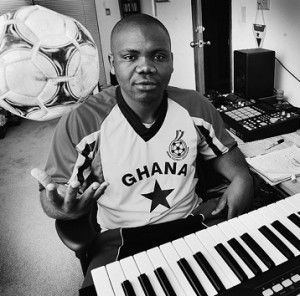 Superfan Kwabena Asumadu is among the fans chosen by Canadian newsaper Vancouver Sun for the World Cup and he believes his native country has the talent to challenge soccer's superpowers.

As a small boy growing up in Cape Coast, Ghana, Kwabena Asumadu knew of no better thing to do with his friends than play soccer.

"In Ghana it's the most affordable sport you can play. All you need is a ball. It's the only sport I knew growing up," said the 25 year-old hip-hop music producer with Funky Boy Music.

"We had a school team and a local club. We played at school, we played at home. We basically played every day, at least three or four hours a day," he said.

Asumadu moved to Coquitlam with his family in 1995 at age 11. It didn't take long to register for a local soccer team after he and his younger brother Kofimade new friends playing soccer that summer. He played in a youth league at Charles Best secondary school and then pickup soccer while completing a financial management degree at the B.C. Institute of Technology.

His first home country has a rich soccer history. It won four African Nations Cup titles from 1963 to 1982 and is the home of Asumadu's childhood hero Abedi (Pele) Ayew, the African Footballer of the Year from 1991 to 1993.

"He was the greatest player to come out of Ghana. He was unbelievable," Asumadu said.

While the 1990s proved to be a decade of rebuilding for Ghana, it has since become a rising star, especially after winning the 2009 under-20 World Cup. The 2010 World Cup marks the country's second consecutive appearance.

"During soccer matches involving the Black Stars it seems like all the towns get together to watch the game. It's a big, big deal for Ghanaians. I think it's going to be an amazing time for Ghana," said Asumadu, who watched most of Ghana's World Cup qualifying games on television with his dad.

"I predict Ghana to make it deep within the tournament," he said.

His prediction is not fevered nationalism; he has good reason to be confident.

Ghana was the youngest team at the 2006 World Cup and still made it past the group stage only to lose to Brazil 3-0 in the Round of 16. Now, it has a number of Premier League players coming into the prime of their careers, most notably captain Michael Essien, a superstar midfielder for Chelsea.

Essien, 27, has it all. He's strong, fast, agile, tactical, and possesses a powerful shot. He stormed onto the world's soccer stage at the 2001 U-20 World Cup in Argentina where Ghana was the runner-up.

In 2005 he became the most expensive signing of all-time for Chelsea when he was transferred from Lyon for Â£26 million (about $40 million Cdn). He's a four-time finalist for African Footballer of the Year.

The only question surrounding Essien will be his health: He suffered a knee injury during the 2010 African Nations Cup in January. While Essien is expected to be healthy by mid-June, Asumadu said Ghana may have to play more defensively if the injury acts up and Essien can't play.

"They are a very well rounded team. Defensively I think they will be a bit better this year than they were last World Cup," he said.

Ghana is nonetheless replete with talent. On the back end are Premier League defenders John Mensah of Sunderland, and John Pantsil of Fulham. In the midfield will be Inter Milan ace Sulley Muntari. And on forward Ghana will look to Asamoah Gyan, its leading scorer, who plays for Rennes in France's Ligue 1.

Look for a spirited effort from the Germans as they look to exact revenge on Ghana midfielder Kevin-Prince Boateng who injured German captain Michael Ballack in the FA Cup final on May 15, leaving him unavailable for the tournament.