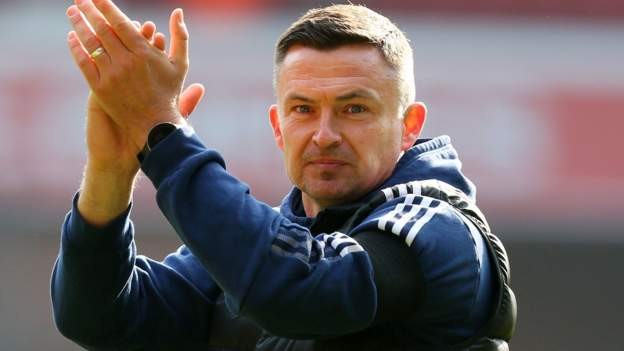 Paul Heckingbottom has been in charge at Bramall Lane since November

Sheffield United's poor record in the play-offs will have no bearing on their semi-final against Nottingham Forest, says Blades boss Paul Heckingbottom.

The Yorkshire side have been involved in the play-offs on eight previous occasions and never been successful.

"It's irrelevant to us," he told BBC Radio Sheffield.

"I don't know why people read into it. It's different players, different staff, different opponent. The whole thing is different."

"It might add to the atmosphere and the crowd, for things they might think about, but not for us."

Heckingbottom led the Blades to a fifth-placed finish in the second tier after taking over from Slavisa Jokanovic in November, when the side were languishing in mid-table.

He acknowledged there are similarities between the seasons the Blades and their opponents have had.

Steve Cooper replaced Chris Hughton in October, with Forest in the Championship relegation zone, before guiding them to a fourth-placed finish.

"You'd have to say we are both there on merit," Heckingbottom said.

"To get to where they finished after only having a few points from seven or eight games tells you what a tough opponent we are facing.

"They recruited really well in January and added some good experience. They came across a settled way of playing with an attacking threat on the counter. We're playing a good team, not just a team in form."

Heckingbottom is hopeful striker Billy Sharp could be fit enough to play some part in one of the two legs against Forest.

Midfielders Jack Colback and Ryan Yates could feature for the Reds after missing the draw with Hull City last week.

Play-off pressure 'what you live for'

Forest boss Cooper is leading a side in the second tier play-offs for the third successive year after taking Swansea to the semi-finals, and then final, in his two seasons there.

He says the group is thriving under the pressure.

"It's not just what you work for, it's what you live for," he told BBC Radio Nottingham.

"You have to embrace these moments and the challenge. The ultimate is to get automatic promotion and we had a good go at that and now we're looking forward to this.

"My sense is that the focus and the buzz is right."

The Reds are looking to return to the Premier League for the first time since being relegated in 1999.

They took their push for automatic promotion into the final week of the season after a superb run under the Welshman and Cooper said it is important to remain level-headed.

"We've got to do it step by step and not look too far ahead. The most important thing is to be ready for Bramall Lane," he said.