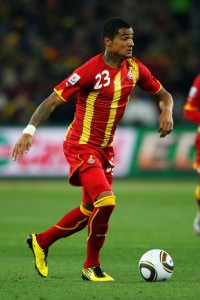 Kevin-Prince Boateng has withdrawn from the Ghana squad to play South Africa in Johannesburg on Wednesday to sort out his club future.

Boateng is seeking a move away from his English club Portsmouth as they have been relegated from the top flight.

His performance at the World Cup has alerted clubs in England and Italy over his potential but no firm deal has been concluded yet.

Newcastle United are said to be keen on him while Italian clubs AC Milan and Genoa are reported to be in advanced talks for his signature.

Boateng will have to stay in Europe so that he is available whenever a club calls for a deal to be signed, the reason why he has opted out of the game.

His absence leaves head coach Milovan Rajevac with 17 players for the game at the Soccer City Stadium tomorrow evening.

Rajevac has already replaced Dominic Adiyiah and John Mensah with Ransford Osei and Bright Addae as both, originally included in the 18-man squad had to pull out.

The match against the Bafana Bafana is the first game since the Black Stars went out in the quarter-final stages at the World Cup in South Africa.