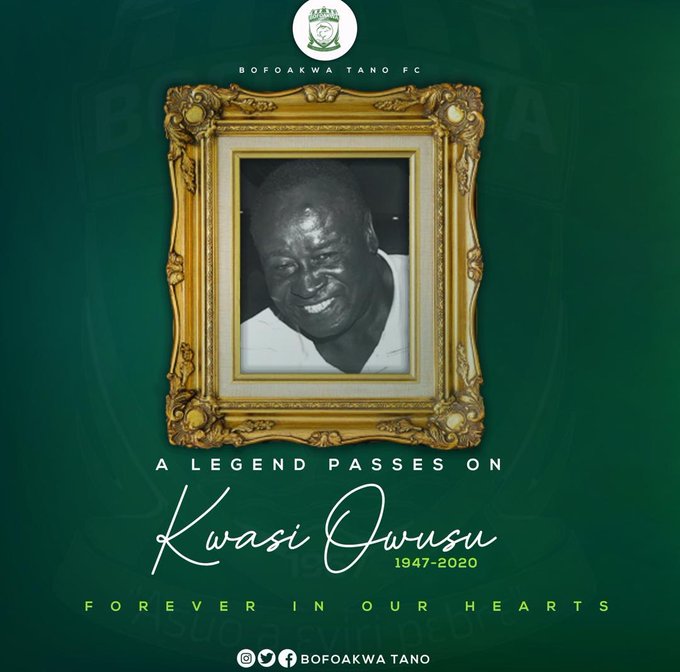 Ghanaian second tier side Tano Bofoakwa have hailed their former captain and Ghana international striker Kwesi Owusu who passed away on Monday, claiming that such 'loyal' players are no longer found in the world.

The former Black Stars captain, who was nicknamed 'Powerhouse', played for the Hunters in his entire career but led Ghana to greatness when they won the 1978 Africa Cup of Nations.

He was 72 and for a long time Ghana's leading scorer both on the international scene and the domestic league as well as captaining the Black Stars for more than ten years.

Bofoakwa released a statement on Monday to hail the player who was fully loyal to his hometown team throughout his playing career in the Ghana top-flight by playing for just one side.

“For all he scored and for all he achieved, he will eternally be reckoned among the greats. A life-long Hunter goes home; may his legacy remain evergreen.”

Owusu was the country's leading international goal scorer with 36 goals until Asamoah Gyan recently took over the mantle.

Despite holding the record for Ghana's top scorer until Asamoah Gyan took over, Owusu never played for any foreign club but local side Bofoakwa Tano throughout his career after joining the club from a lower division side Yara Stars.

He played just six matches in the Ghana top-flight before he was called into the Black Stars squad where his most impact was felt when he scored nine goals in a two-legged match against Niger in the Africa Cup of Nations qualifier.

He rose to fame after his heroics in the 1970 Africa Cup of Nations qualifier against Niger by scoring five goals in the first leg and four goals in the return encounter in Niamey in 1969.

The bulky striker affectionately referred to as ‘Powerhouse’ scored nine goals in both ties to hand Ghana qualification.

He captained the Black Stars at the 1970 Africa Cup of Nations held in Sudan.

Owusu was part of the 1968 and 1970 squads that lost the finals to Congo Kinshasa and host nation Sudan respectively, scoring four goals.