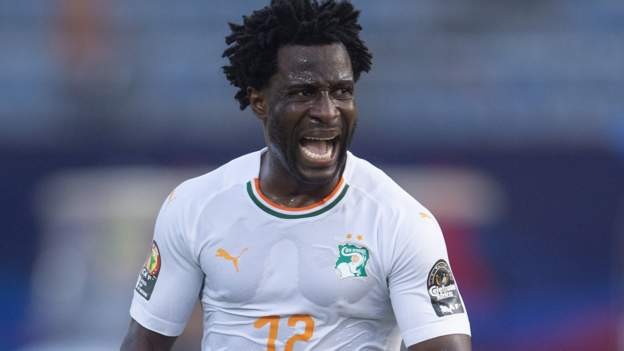 Wilfried Bony: Would I rejoin Swansea City? Why not?

Former Swansea City and Manchester City striker Wilfried Bony says he is willing to play anywhere in the world as he prepares to sign for a new club.

The Ivory Coast international is training with League Two Newport County after a spell in Saudi Arabia.

Bony, 32, would relish another opportunity in English football but is considering all options.

"My agent and staff, they are talking with Turkish sides, Chinese sides, Korean sides, in Russia also," he said.

"But I leave that to them. I just focus on my training, to get fit and get ready for when the moment comes for me to move."

Bony joined Manchester City from Swansea in a deal worth up to £28m in January 2015.

He earned a move to Etihad Stadium after scoring 34 goals in 70 Swans appearances, having joined the Welsh club from Dutch side Vitesse Arnhem for £12m in 2013.

But he struggled to hold down a regular first-team place at City, scoring 10 goals in 46 appearances before joining Stoke on loan and then returning to Swansea for £12m in 2017.

Bony was hampered by injury in his second spell at the Liberty Stadium, where he scored four times in 26 games.

He had a spell on loan at Qatari Al-Arabi in 2019, then joined Saudi Arabian side Al-Ittihad in January 2020 before cancelling his contract in November.

Bony then returned to his family home in Swansea - his two sons are in the academy at his old club - and began training last week with Newport, where he also had a lengthy spell last year.

"I tried to train with Swansea and it was quite difficult with the first team," Bony said.

"Then the academy boss tried to find a place for me to train with the under-23s but it took a long time because of coronavirus, all of these things.

"Then I decided to go to train with Newport. My friend is there - the coach [Mike] Flynn. We have a great relationship so when I asked him he said: 'Yeah, come.'

"They help me a lot - the same as last year. I say thanks to them."

Bony says there is no chance of him signing for Newport, but he would be interested in signing for a club higher up the English ladder.

"Yeah, why not? We listen to everything and then we see what is the best option for us," he said.

Bony believes he can go on playing professionally for another "three to four years".

"We have to be grateful every time we are on the pitch. It's a privilege so I have to enjoy every minute I have got," he said.

Bony played - and scored twice - for Ivory Coast at the 2014 World Cup and was also part of the side that won the 2015 Africa Cup of Nations.

He has not played for his country since the 2019 Africa Cup of Nations but is open to a return to international football.

"The team's doing well - they have got some experienced players to guide them," Bony said.

"I am open if the coach needs me. I speak to the coach. He wants me to get back playing because he knows me - we won the cup together in 2015.

"He knows what I can give to the team. For me, the most important thing is to find a team, to get back on track and enjoy my football."

Bony is in contact with fellow Ivory Coast international Sol Bamba, who revealed last week he has been diagnosed with Non-Hodgkin lymphoma.

"It's very sad news but I know him. He is a strong guy," said Bony.

"I just thank god they discovered it soon so he has got a chance. I know he is going to beat it. We pray for him."

All the goals, highlights and analysis from the weekend's Premier League matches, including Manchester United's visit to Liverpool: MOTD2 is streaming now on BBC iPlayer