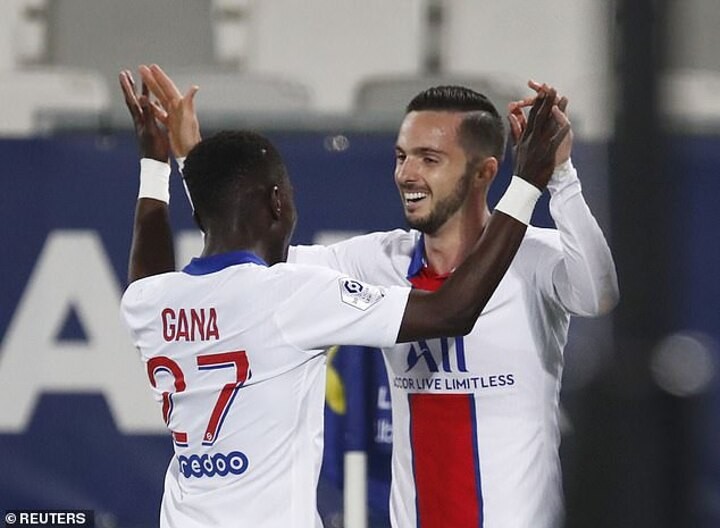 Pablo Sarabia made up for Paris St Germain's lack of firepower as he earned the French champions a crucial 1-0 win at Bordeaux on Wednesday in an extremely tight Ligue 1 title race.

The Spanish attacking midfielder scored in the 20th minute to put Mauricio Pochettino's side on 60 points from 28 games, two behind leaders Lille who had Jonathan David's last-gasp double to thank for a 2-0 victory over Marseille.

Third-placed Olympique Lyonnais, 1-0 winners against Stade Rennais earlier on Wednesday, are one point adrift of PSG.

Monaco stayed fourth on 55 points after suffering a late 1-0 defeat at Racing Strasbourg, their first in their last 13 league matches.

PSG were without the suspended Kylian Mbappe and injured Angel Di Maria and Neymar, while Moise Kean was ruled out after testing positive for Covid-19.

Sarabia started on the right wing with Mauro Icardi the only proper striker on the field and the Spaniard made his mark, breaking the deadlock by whipping a left-footed effort past Benoit Costil after collecting an Idrissa Gueye cross in the area.

It was Sarabia's fifth league goal this season.

PSG, also without the injured midfielder Marco Verratti, were once again uninspired but Bordeaux had even less to offer.

Lille appeared on course for their third draw in four games but Canadian striker Jonathan David saved the day as he tapped home in the last minute after Steve Mandanda parried Jonathan Ikone's shot into his path and he struck again two minutes into stoppage time.

Ligue 1 will resume in nine days after the French Cup this weekend, with PSG travelling to Stade Brestois in a last-32 game.