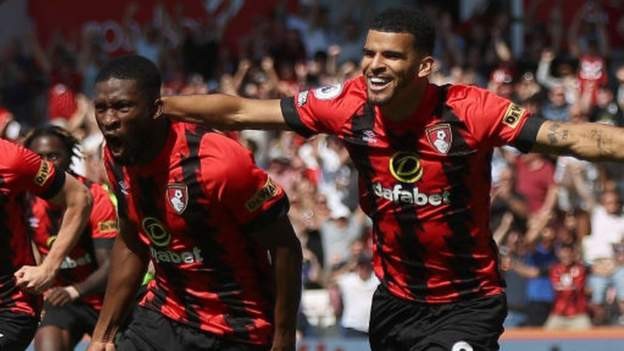 Bournemouth marked their return to the Premier League with a confident opening-weekend victory over Aston Villa at the Vitality Stadium.

The Cherries took the lead on three minutes - with Villa temporarily down to 10 men as left-back Lucas Digne was off the pitch to remove jewellery. Debutant Marcus Tavernier's corner was headed down by Lloyd Kelly for Jefferson Lerma to fire home.

They should have taken a two-goal lead into the interval but Kieffer Moore was unable to meet Adam Smith's low ball into the box, which was played through by the excellent Dominic Solanke.

Wales international Moore, who at the age of 29 was making his debut in the top flight, eventually doubled the home side's lead with a commanding header on 80 minutes after Kelly played a dangerous cross back into Villa's area.

Danny Ings had a shot saved by Cherries keeper Mark Travers and new Villa captain John McGinn saw a long-range drive go high and wide, but it was debutant Boubacar Kamara who had gone closest to an equaliser for the visitors.

The French midfielder - a free transfer from Marseille - found himself in space and unleashed a right-footed effort from 30 yards that just went wide of Travers' post.

Bournemouth are likely to face a tough task to avoid relegation in their first season back in the Premier League but for now, at least, boss Scott Parker can be pleased with the spirit shown by his team in front of their home supporters.

After signing a four-year extension to stay until the summer of 2026, Solanke offered the same physical presence up front that saw him contribute 29 goals to the Cherries' promotion campaign last season.

A promising debut by new recruit Tavernier should also satisfy Parker. The former Middlesbrough midfielder was described as "a big signing" by Parker after arriving for a fee reported to be about £10m, and he was an attacking threat in support of Solanke and former non-league striker Moore.

Conversely, there was little to impress Villa manager Steven Gerrard.

They were sluggish from the off and the likes of playmaker Philippe Coutinho, who made a permanent move to Villa Park in May after a successful loan spell from Barcelona, was largely anonymous.

The chances for Kamara and Ings gave the travelling supporters minor moments of excitement, but Gerrard will be hoping this is just a bump in the road and not a continuation of their poor run at the end of last season, which finished with only two wins from 11 games.

Douglas Luiz (Aston Villa) is shown the yellow card for a bad foul.

Ryan Christie (Bournemouth) wins a free kick in the attacking half.

Dominic Solanke (Bournemouth) wins a free kick in the defensive half.

Kieffer Moore (Bournemouth) wins a free kick in the defensive half.

Lucas Digne (Aston Villa) wins a free kick in the defensive half.

Emiliano Buendía (Aston Villa) wins a free kick in the attacking half.

Matty Cash (Aston Villa) wins a free kick in the defensive half.

Kieffer Moore (Bournemouth) wins a free kick in the defensive half.