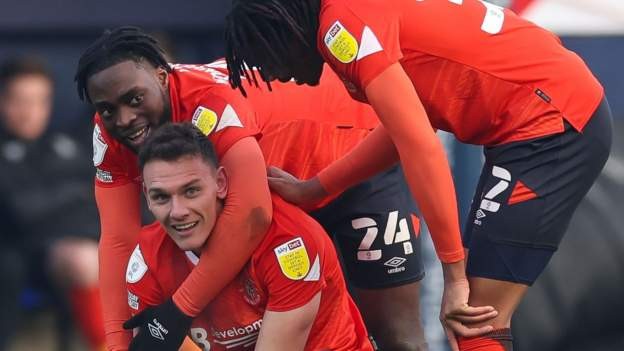 Bournemouth suffered a setback in their push for promotion as Kal Naismith's added-time goal gave Luton victory in a dramatic finish at Kenilworth Road.

Scott Parker's side, one point clear at the top of the Championship at kick-off, fell behind to an own goal by Lloyd Kelly, the ball ricocheting in off his shin after Mark Travers saved with his feet from Elijah Adebayo.

Luton doubled their lead when midfielder Allan Campbell beat Travers from 20 yards for his first goal for the club, but Bournemouth asserted themselves after the break and Emiliano Marcondes headed home Jack Stacey's cross.

Morgan Rogers levelled by firing into the roof of the net just moments after coming on as a substitute only for Naismith to snatch the win on the 77th birthday of former Luton boss David Pleat with a left-foot strike.

The defeat was only Bournemouth's third away from home in the league and the three points lifted Luton up to 13th, pending the results of later kick-offs.

The visitors had looked confident in possession from the outset, with Ryan Christie forcing James Shea to an early one-handed save from Jaidon Anthony's angled ball into the box.

But they were hustled out of their stride by Luton, who took the lead through Kelly's own goal after Sonny Bradley had flicked on a cross to the impressive Adebayo.

The referee initially awarded them a second when Cameron Jerome side-footed into the net after Bournemouth failed to clear a corner, but changed his mind after consulting his assistant.

The Hatters - who had not played a league game since 11 December - were not to be denied, though, and Naismith bisected Bournemouth's defence with a pass to Campbell, who fired home as the defenders backed off.

Jefferson Lerma curled a 25-yarder just wide in response to give a warning of what Bournemouth are capable of and the second half was only five minutes old when Stacey cut in from the right and Marcondes outjumped Jordan Clark to reduce the deficit.

Luton lost Campbell and Reece Burke to knocks and while they were readjusting the Cherries pounced to level, Jamal Lowe cutting back to Rogers and the Manchester City loanee emphatically driving home his first senior goal.

The home side refused to buckle and although Travers tipped over a fierce effort from Clark, he could not deny Naismith, who picked his spot in the corner after collecting a loose ball just outside the box.

Attempt saved. Jordan Clark (Luton Town) left footed shot from outside the box is saved in the top centre of the goal. Assisted by James Shea.

Elijah Adebayo (Luton Town) wins a free kick in the attacking half.

Jefferson Lerma (Bournemouth) is shown the yellow card for a bad foul.

Elijah Adebayo (Luton Town) wins a free kick in the attacking half.