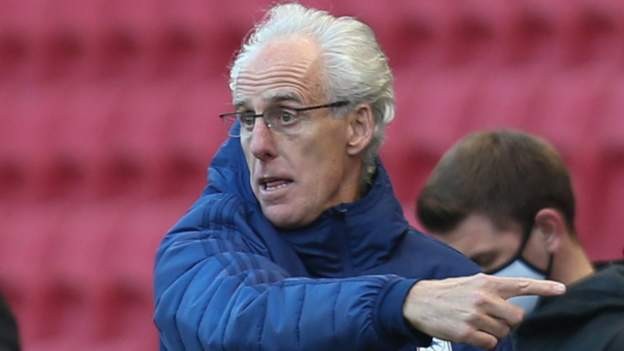 Cardiff's form since McCarthy's appointment has put them within three points of Bournemouth, who occupy the final Championship play-off berth.

"I still think Bournemouth are one of the favourites to finish in the top six. It's a good test for us," he said.

Cardiff were looking over their shoulders at a possible relegation fight when McCarthy succeeded Neil Harris in January, but have since collected 17 points from seven games.

They will now play a side above them in the Championship for the first time under McCarthy, who feels this is a high stakes contest for both teams.

The Cherries are also under new management, having confirmed the appointment of Jonathan Woodgate until the end of the season.

Last season Cardiff made a late surge to the play-offs after the season restarted and expectations have risen with their climb up the table since McCarthy's arrival, but he has warned Bournemouth will provide a stern test.

"I hope we emulate that (last season)," he added. This is a different test against a stronger squad and one a bit more fancied than the others we have played.

"All we can do is keep stressing that momentum has come about out of good performances.

"Everybody be prepared, everybody look after their own performance, look after each other, play as well as we can and if we do; quite clearly we have the ability to win games in this league."