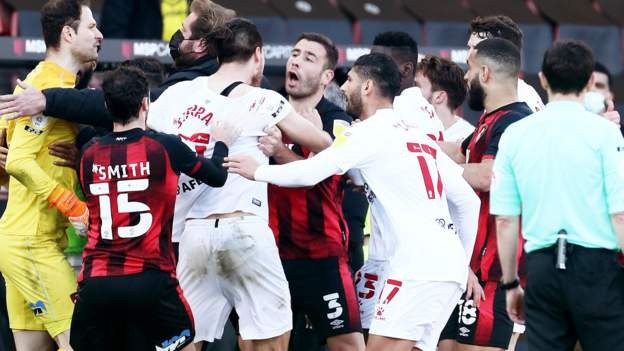 Arnaut Danjuma squeezed home the only goal as Bournemouth beat high-flying Watford in an ill-tempered game to stay firmly in the promotion hunt.

Netherlands striker Danjuma struck the winner low on the half-volley after a long free-kick, beating goalkeeper Daniel Bachmann at his near post from a narrow angle.

It came minutes after a previously sedate match sprung to life - Danjuma twice going close for Bournemouth and Tom Cleverley denied at the other end - while Ismaila Sarr went agonisingly close to prodding in a leveller from Ken Sema's header.

Victory is Bournemouth's first since head coach Jonathan Woodgate was appointed for the rest of the season and moved them back into the Championship play-off places, in fifth, before the 15:00 GMT games, while Watford stayed third, seven points behind leaders Norwich, after seeing their four-game winning run ended.

The first sign of animosity between the sides came just before Danjuma's goal, as Watford's Nathaniel Chalobah was booked after appearing to push opposing midfielder Jefferson Lerma in the face.

Replays showed Bournemouth's Lerma made the most of the incident, with Chalobah's yellow his 10th of the season - meaning he will miss the Hornets' next two matches.

From that point on there was a fiery undercurrent to the game which spilled over when Pedro caught Lerma with a sliding challenge, sparking clashes between players.

Former Arsenal and England man Wilshere - only on as a 75th-minute substitute - earned his second yellow card in five minutes for his part in the melee, with play briefly resuming before the final whistle.

Watford's best opportunity came with the game goalless when Cleverley was put through by Sarr, but Asmir Begovic saved his low effort.

For Xisco Munoz's visitors it was only a second league defeat in 12, while it was a good response from Bournemouth after back-to-back defeats by QPR and Cardiff.

Jefferson Lerma (Bournemouth) wins a free kick in the defensive half.

João Pedro (Watford) is shown the yellow card for a bad foul.

Jefferson Lerma (Bournemouth) wins a free kick in the defensive half.

Shane Long (Bournemouth) wins a free kick in the defensive half.

Attempt blocked. João Pedro (Watford) right footed shot from the right side of the box is blocked. Assisted by Will Hughes.

Will Hughes (Watford) wins a free kick in the attacking half.

Attempt missed. Achraf Lazaar (Watford) header from the centre of the box is high and wide to the left. Assisted by Tom Cleverley following a set piece situation.