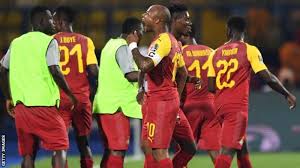 Black Stars will face a tough Guinea Bissau side

Belgium-based strong defender will also make his first start at the 2019 Africa Cup of Nations as he has been named to partner John Boye in the absence of suspended Kasim Nuhu and injured Jonathan Mensah.

With injuries to several key players in the squad it was thought Gyan, a tried and tested attacker, will be used for the must-win 2019 Africa Cup of Nations clash with the Djurtus.

But coach Appiah has other ideas by injecting speedy young players in the squad with the clear intention of getting fit and strong men to face Guinea Bissau who are expected to some out fighting.

He further sprung a surprise by leaving out Kwadwo Asamoah in his starting line up indicating that he was not satisfied with the performance of the Inter Milan player's performance in the match against Cameroon.

While axing some of the top players players Appiah kept faith with the senior players who have excelled with Thomas Partey and Mubarak Wakaso keeping their places in central midfield.

Other keeping their places in the team at the wing backs of Andy Yiadom and Baba Rahman as well as brothers Andre and Jordan Ayew who have been impressive in the opening two matches.

Richard Ofori keeps his place in the post with John Boye returning from suspension to be partnered by Genk defender Aidoo who makes his first tournament appearance.

In the absence of injured Christian Atsu, talented Serbia-based youngster Samuel Owusu will start from the right side of midfield with his fellow youngster Kwabena Owusu to partner Jordan Ayew in attack.

Andre Ayew will start from the left side of midfield as coach Appiah packs his squad with players capable of fighting to secure the needed result for the Black Stars.

Ghana were one of the favourites to win the Africa Cup of Nations, having lifted the title on four previous occasions, but they have gotten off to a slow start this time.

The Black Stars will face Guinea-Bissau tonight off the back of two draws against Benin and Cameroon.

Ghana might face a spirited Guinea side in Egypt, as the African Wild Dogs can only advance to the knockout stages if they win and other results go their way.

However, manager James Appiah has one of the strongest squads in the competition to choose from, including Thomas Partey, who is a transfer target for both Manchester United and Arsenal.

Do you think this is the best Ghana starting line up for the match? Make your views known in the box below