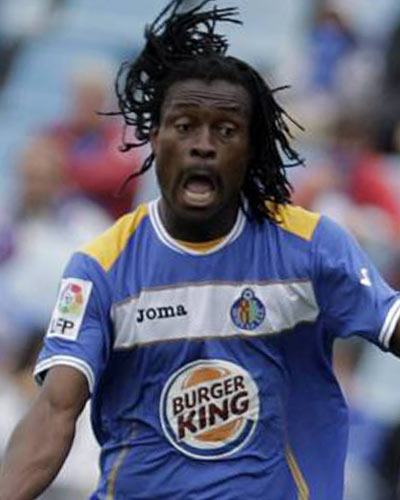 The 28-year-old, who was reluctant to move to Ukraine, was transferred for US$8.5m. Boateng agreed a three-year contract, sources close to the deal have told MTNFootball.com.

"The deal for Boateng was sealed on Monday night after he finally agreed on his personal terms," a source close to the deal told MTNFootball.com.

Dnipro slapped in the offer for the Ghanaian last week but he was unhappy over his salary offered by Dnipro and a move to Ukraine.

Boateng even travelled to England at the weekend with West Brom or Aston Villa said to be interested in him but the Premier League clubs were unable to meet Getafeâ€™s demands.

But on Monday night an agreement was reached over his personal terms which paved the way for him to join the ambitious Ukrainian club.

He will join his compatriot Samuel Inkoom at the club coached by former Tottenham coach Juande Ramos.

Dnipro are boosting their squad in their ambitious quest for a Ukrainian title and a place in the Champions League next season.

Boateng joined Getafe in 2009 and played 36 games, scoring twice with his last game being their clash with Real Sociedad.

Getafe got a lot of money from his transfer but lose a player who has been instrumental in the past two seasons.

Budget cuts and needs to balance the accounts of Getafe have motivated the African player's departure who is a favourite with the club's fans.

Last season he was voted the best player of the season by the club's supporters.