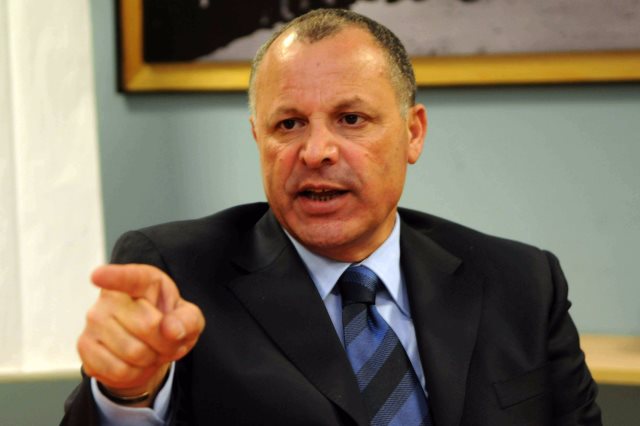 Hani Abou Rida announced his resignation as the President of the Egyptian Football Association on Saturday night and called on the members of the board of directors to submit their resignations following the country defeat at the hands of South Africa at the 2019 Africa Cup of Nations.

Abou Rida, who is a member of the FIFA Council and CAF Executive Committee, revealed that he will continue to chair the Local Organising Committee of the tournament until it ends on 19 July.

The respected administrator threw in the towel two hours after the host country was shockingly eliminated by underdogs in Cairo on Saturday night despite the massive home support.

The Pharaohs were bundled out of the tournament at the Round of 16 after suffering the surprising 1-0 defeat to the confident Bafana Bafana who now book their place in the quarter-finals with  the late winner in Cairo.

With Egypt throwing players forward, Thembinkosi Lorch struck on the counter-attack after 85 minutes leading to the disaster for the home side.

South Africa knocked hosts Egypt out of the tournament and booked their place in the quarter-finals with a late winner in Cairo when Thembinkosi Lorch struck on the counter-attack after 85 minutes.

Abu Reda said that this decision comes as a literary commitment, although the EFA did not limit itself to the material and moral support it gave to the Pharaohs.

And about the fate of the technical and administrative staff of the team he confirmed that a they have all been sacked in the wake of the national disaster and asked members of the his board to also quit their positions.

Abu Rida also stressed that it is his national responsibility to continue to chair the organizing committee until the end of the tournament because success in the organization was from the beginning to the end to achieve secure a good reputation for Egypt.

Egypt have followed holders Cameroon out of the tournament, while South Africa will return to Cairo to play Nigeria in the last eight on Wednesday. 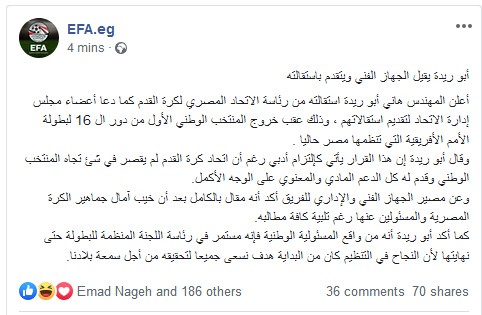