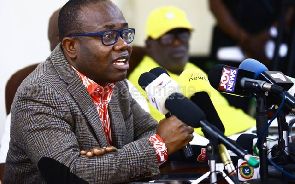 Ghana will not be competing for the hosting rights of the 2018 Championship of Africa Nations after the country failed to submit a bid by the deadline set by CAF.

There was a huge outpouring of the desire for the West African country to host the competition for home-based player after a successful hosting of the WAFU.

The sports minister of Ghana Isaac Asiamah also expressed the desire for the country to host the CHAN tournament which sparked hopes that Ghana could apply to host the competition.

However by the deadline set by CAF, Ghana was not among the countries that applied to be hosts of the competition.

Equatorial Guinea and Ethiopia joined Morocco as the three countries to have tabled official bids for the hosting of the 2018 CHAN, the Confederation of Africa Football has reported.

"At the end of the deadline for submission of applications on Saturday 30 September 2017 at 23:59, three federation's had submitted their bids to the General Secretariat of the Confederation Africaine de Football for the organisation of the 2018 Total African Nations Championship, namely, Equatorial Guinea, Ethiopia and Morocco," a CAF statement read.

The Executive Committee of CAF at a meeting earlier this month stripped off the hosting rights of the Championship of Africa Nations from Kenya due to ill-preparations.

At its meeting on September 23, 2017, CAF Executive Committee decided to complete the process of selecting a new host country for the tournament scheduled for January 2018, within 15 days. After Kenya, the initial host, failed to meet the requirements.

CAF earlier reported that Morocco had officially bid for the hosting rights of the competition.

But CAF has officially announced on Sunday evening that Equatorial Guinea and Ethiopia have joined the race for the bid to host the tournament.

Total CHAN is a competition that brings together 16 national teams made up of players selected in their national championships. The 5th edition is to be held in 2018.

Morocco had already qualified for the biennial tournament which is only for locally-based players.