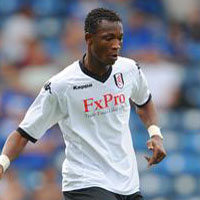 The right-back signed a three-year contract with the club on Thursday afternoon after passing a medical.

Pantsil moves to the ambitious club on a free transfer after being released by Premier League side Fulham at the end of last season.

Leicester, who have high-profile coach Sven Goran Ericksson in charge, are determined to move the club to the top-flight.

Pantsil says he is delighted to join the club to help in their chase for promotion.

"I visited the club yesterday, met the coach and some of the club officials and I am very happy with what I saw.

"The club has got a lot of ambition to succeed at the high level with their fantastic fans and that is why I chose to join them despite some other offers.

"I see this as the biggest challenge of my career so far and together with my new team-mates we will fight to make Leicester City climb to the top."

Pantsil was out-of-contract with Fulham and Eriksson pounced on the free agent to boost the Foxes squad ahead of the new season.

Pantsil, capped 66 times by Ghana, fell out of favour at Craven Cottage under Mark Hughes last season and he wasnâ€™t offered a new deal to stay at the club beyond this summer.

The experienced defender arrived in England in 2006 at West Ham United before making the switch to Fulham.