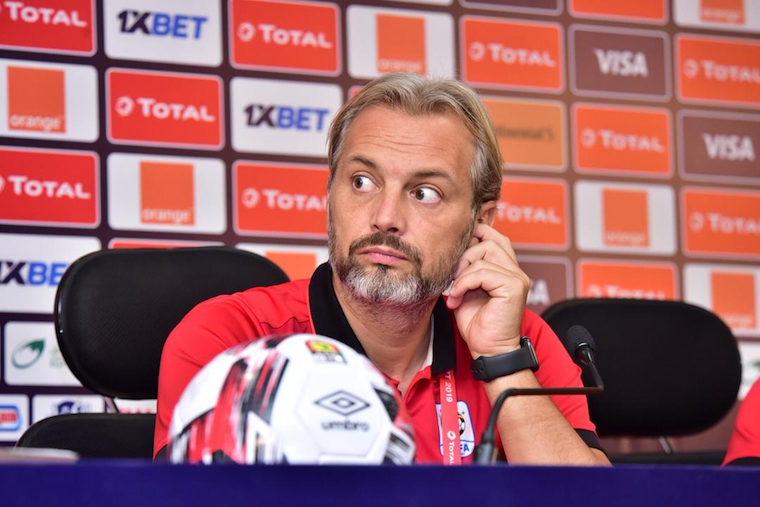 Sebastien Desabre resigned as the coach of Uganda on Sunday morning after the Cranes crashed out of the 2019 Africa Cup of Nations in Egypt.

Frenchman left the post two days after they were eliminated at the Round of 16 stage of Africa's flagship football competition after their 1-0 defeat at the hands of Senegal.

Desabre led the Cranes to their best showing at the tournament since 1978 and leaves the post with five months left on his contract after signing up in December 2017.

He took over the job from Serbian tactician Mulitin ‘Micho’ Sredojevic who left the side to join South African Orlando Pirates.

Even though sources close to the coach said he left the position, the Federation of Uganda Football Association (FUFA) released a statement on Sunday morning that it had parted ways with Desabre.

“On the 6th of July 2019, both FUFA and National Team Head coach of the Uganda Cranes Desabre mutually agreed to terminate the contract between the two parties,” the statement read.

"The reasons for termination of the employment contract are for the benefit and growth of both parties."

At the group stage of the 2019 AFCON, Uganda beat DR Congo 2-0 before drawing 1-1 with Zimbabwe and losing 2-0 to host Egypt before the defeat to Senegal on Friday led to their exit.

FUFA praised Desabre for his role in making Uganda a respected side in Africa after leading them to their best appearance in the tournament in 41 years before a pay dispute seemed to have rocked the side leading to a sit-down strike by the players.

"FUFA recognises the contribution by Mr. Desabre for the improvement of the sporting and professional organisation of the Uganda Cranes inclusive of qualification to the AFCON 2019 Finals and also to the Round of 16," the statement said.

"Mr. Desabre is grateful to the people and the Government of Uganda, FUFA, Sponsors, Staff and the players that have provided him a good environment to fulfill his obligations in his first time role as a National Team Coach.

"FUFA will communicate any further development about the Uganda Cranes technical staff and future programmes of the National senior team in the nearest future."

Desabre, who previously coached Egyptian side Ismailia, has been linked with a return to the North African country with giants Al Ahly said to have reached a deal with him.