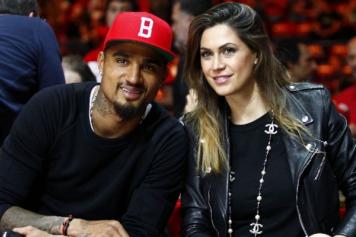 Kevin-Prince Boateng and his Italian-American wife Melissa Satta have broken up and have secretly filed for divorce, sources close to the duo have exclusively told Ghanasoccernet.com

Two separate confirmations from two trusted friends of the couple have confirmed to Ghana's leading soccer news outfit, Ghanasoccernet.com, that the court process to dissolve the marriage has started in an Italian court.

This comes even though just last month the showgirl Satta failed to confirm of deny their imminent divorce insisting she still has a ring on the finger.

The weekly magazine Oggi revealed last month that after having spent the holidays separated but couple were on the verge of divorce.

There is now confirmation from two friends of the duo that they have already filed for a divorce.

According to another report in the Italian media, the intention of the two is now to keep quiet about the situation for as long as possible to protect their son, Maddox.

The former AC Milan and current Sassuolo player married Satta in 2016 but the latter has accused the Ghana star of cheating while others claim Boateng is seeking a return to his former wife.

The Italian TV star has been married to the Sassuolo star for over two years now but Satta currently lives alone with their four year-old son Maddox.

Satta deleted all images of her and the German-born ex Ghana international on social media last month and that has fuelled speculations they are divorced.

The 38-year-old has responded to the rumours by saying: "As long as I have the ring on the finger means that I am still a married woman.''

But it is now clear that they have gone their separate ways with the divorce proceedings now in court.

Boateng divorced his wife Jennifer in 2016 after the duo quarreled over his philandering way.

They had a son called Jermaine-Prince.