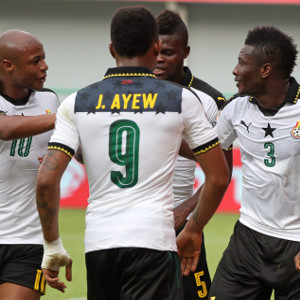 Black Stars will play for victory against Egypt this evening

The former Chelsea boss also switched position for hardworking defender Harrison Afful who will play at the left-back instead of his original right-back position.

This means Afful takes Acheampong's position at the left back while England-based Yiadom takes the position of Afful at the left-back with goalkeeper Razak Brimah keeping his place.

Mensah, who was the first choice before Amartey took over at the start of this competition, will now get the chance to play along John Boye at the heart of the defence as the Leicester City ace is rested.

Enterprising and hardworking Daniel Amartey will play in midfield and so will talented Christian Atsu keep his place on the right wing.

Badu will partner Andre Ayew behind lone striker Asamoah Gyan as the Black Stars adopt a cautious approach of taking control of the midfielder.

Ayew's position on the left wing will be occupied by another youngster Samuel Tetteh as the Black Stars seek to finish the group with a win.

A draw in Port Gentil on Wednesday would be enough to see already qualified Ghana finish top of Group D and set up a quarter-final meeting with Morocco.

Egypt need to win or at least draw against Ghana as they are second in group D with four points, two behind Ghana who ensured their place in the last eight after a narrow 1-0 victory over Mali earlier on Saturday.

Egypt's loss would be a great present for Mali who need to win against Uganda to collect four points.

The runners-up in Group D will play the Democratic Republic of Congo in the quarter-final on Sunday.

What do you think about Ghana's starting line-up to face Egypt? make your views known in the box below: