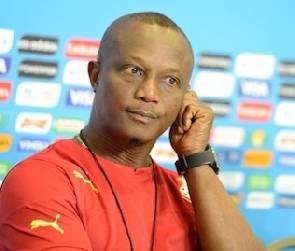 Ghana have sacked Kwesi Appiah as coach of the national team the Black Stars, just 24 hours after beating Togo in the 2015 Africa Cup of Nations qualifier.

Serbian coach Milovan Rajevac is highly-fancied to named to take charge of the position on full time basis even though he arrived in the country to be the technical adviser of Appiah.

The decision to sack Appiah comes as a massive shock as a technical adviser was expected to have been named this week to help steer the Black Stars in the right direction.

A three-man committee set up to look for the right person to assist Appiah had its work shortened as the Executive Committee of the GFA took the decision to sack the coach on Thursday night.

The GFA is refusing to comment on the news of Appiah's sacking which has gone viral with many supporting the decision even though he is hugely popular among Ghanaians for his legendary calmness.

Appiah seems to have paid the ultimate price for the Black Stars poor showing against Uganda on Saturday as the Ghana Football Association had previously strongly backed him to stay in the post after a disastrous outing at the 2014 World Cup.

But the team's poor showing in the match against the Cranes looks to have convinced the GFA that his stay is untenable and that a new coach is needed to move the Black Stars forward.

The GFA stuck with Appiah despite the Black Stars failure to get past the group stages of the World Cup in Brazil but events over the past few days seems to have conspired against the coach.

The public approval ratings of the Ghana coach is low after what some sports analysts described as â€œhigh profileâ€ failures in the last African Cup and at the world cup in Brazil.

This led to swift moves by the Ghana FA to scout for a technical adviser to assist the â€œembattledâ€ Appiah.

Rajevac is seen as the most successful foreign coach to have worked in Ghana.

He led the Black Stars to the final of the 2010 Nations Cup in Angola and later that year to the World Cup quarter-finals in South Africa.

Appiah was appointed as the Head coach of the Ghanaian national team in April 2012,describing himself as "the underdog" in the process.

His Ghana team qualified for the 2014 World Cup in Brazil, making him the first black African coach to take the country to the World Cup.

He was given a new two-year contract in May 2014. After the country exited the World Cup in the group stages, Appiah defended his team.

The former defender was coach of Ghana U23 as they won the 2011 All-Africa Games.

Appiah, a left back, played club football with Asante Kotoko, playing for them between 1983 and 1993.

He played for the Ghanaian national team between 1987 and 1992 appearing in two FIFA World Cup qualifying matches and also captained the team.