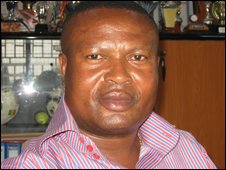 Ghana football has been dealt a devastating blow after the country's best talent spotter Alhaji Sly Tetteh, the man who discovered Michael Essien, died on Saturday.

He collapsed and died while playing a friendly football match in Cape Coast.

Tetteh, who serves on the Caf Fustal Committee, will be buried on Sunday, family sources have told GHANAsoccernet.com in accordance with Islamic traditions.

The devout Muslim died while playing the game he loves as he collapsed during a match between ex-footballers to commemorate a local festival in Cape Coast.

Tetteh is the president of Liberty Professionals FC, the Ghana Premier League club that nurtured Essien.

He also runs three football academies under the Liberty banner in Ghana, Benin, Togo and Kenya - overseeing dozens of youngsters united by a desire to win professional contracts in Europe.

Aside from Essien, Tetteh has smoked many other players out of unglamorous surroundings and dispatched them on the path to football stardom and untold riches.

In fact, it almost goes without saying that Tetteh's ability to discover future stars is one of the main reasons behind Ghana's resurgence as an African football power.

No fewer than six members of the current Black Stars squad were signed by European clubs on his recommendation.

Sulley Muntari, John Pantsil, Asamoah Gyan, Derek Boateng, Kwadwo Asamoah and of course Essien, are the players in question - all of whom are key beneficiaries of Tetteh's hawkish eye for talent.

A meticulous football man, Tetteh often motivates his recruits by constantly reminding them that they can use football to escape from grinding poverty.

But like any scout worth his salt, he admitted that spotting good players is an art form where dismissing the chaff and retaining the wheat is what matters most.