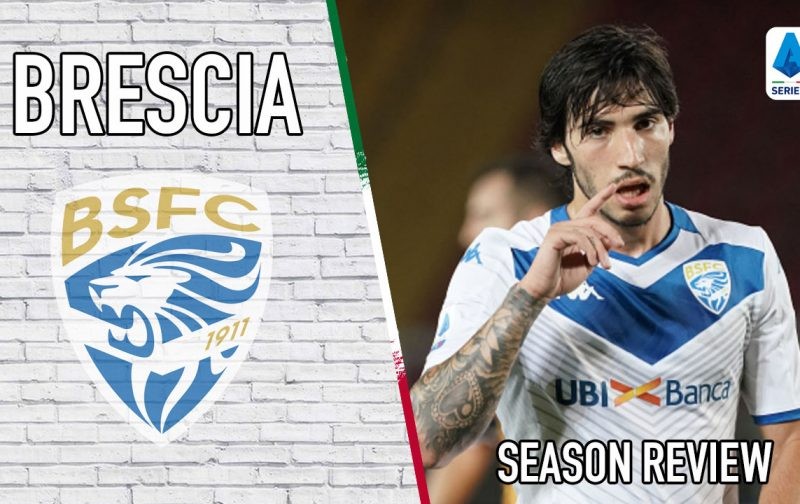 Even the most optimistic of Brescia supporters would have been hard pressed to find any reason to suspect that they would face anything other than a relegation battle in their return to Serie A.

However, an opening day victory at Cagliari briefly provided a sense that maybe they could steer clear of trouble over the course of the season. That feeling of security lasted only six days before a period of 12 games with only one win and the beginning of a coaching circus that put the story lines of most soap operas to shame ensued and the Leonessa fell firmly into the relegation places.

The bottom three would be where they would remain and with only four more wins to their name by the end of July the inevitable was confirmed, a 3-1 defeat to fellow relegation battlers Lecce ensuring that Brescia will spend the 2020/21 campaign back in Serie B.

Player of the Season: Alfredo Donnarumma In a season that offered very little in the way of success Donnarumma proved to be, along with Sandro Tonali, one of the few shining lights at the Stadio Mario Rigamonti. The 29-year-old contributed to over a quarter of the team’s goals (seven goals and two assists) in his first season in Serie A and ran himself into the ground for the Leonessa despite always fighting a losing battle. Romulo arrived in Brescia, on loan from Genoa, with little in the way of fanfare and not much was expected from the ageing midfielder by the Leonessa faithful. But the 32-year-old went on to make 23 league appearances, tallying a goal and three assists, and provided some much needed experience in the middle of the park when he was called upon.

His long range strike in a 1-0 win over Udinese back in September provided his highlight of the season, as the Biancazzurri won for the second time in their opening four games. In modern football there is an inevitability that struggling teams will change the man in charge when things take a turn for the worse, but even by those standards Brescia’s coaching conundrum became a circus.

Despite being the most successful of three men to have stood in the technical area for Brescia this season, overseeing the team for four of their six wins, Corini achieved the unenviable feat of being disposed of twice in one season by the Biancazzurri. Having only managed two wins in their opening 10 games Corini faced the chopping block for the first time in early November.

Grosso was the man chosen to steady the ship, but after only 31 days, three straight defeats, no goals scored, 10 conceded and a falling out with star striker Mario Balotelli, it was decided that Corini should once again take the reins. The 49-year-old’s second tenure was almost identical to the first, with only two wins from nine games ensuring he was out of a job by February.

Lopez, a veteran of over 300 Serie A appearances as a player for Cagliari, was Brescia’s last roll of the dice to turn their season around but inevitably the 45-year-old had the same success as his predecessors and would ultimately go down with the sinking ship.

In a season that ended with relegation, and suffered a host of on and off field low lights, memorable moments are hard to come by. However, the Leonessa’s opening day victory over Cagliari stands out as one of the happier memories of a turbulent return season in Serie A.

If the coming season wasn’t already a concern for those who hold the Biancazzurri dear a tough trip to Sardinia to open the campaign would have provided little in the way of hope. But for those 90 minutes Brescia looked like they belonged in Serie A as they traded blows with their hosts, and Donnarumma’s spot kick just before the hour mark gave the travelling supporters one of their only winning feelings of 2019/20. On the field the season couldn’t have got much worse for Brescia as they were heavily outclassed throughout the campaign but defeats in both Derby della Lombardia clashes with heated rivals Atalanta, the second a 6-2 drubbing, were particularly low moments in a difficult return to Serie A.

If the problems on the pitch weren’t enough star signing Balotelli, who arrived as the club’s great hope for the season, was at the centre of several publicly played out incidents with members of the Brescia hierarchy. He was subjected to racially insensitive comments by club president Massimo Cellino after receiving racial abuse in a clash with Hellas Verona, before falling out with Grosso in his short tenure as coach.

Balotelli and Cellino were once again embroiled in a public disagreement over the club’s apparent failure to pay the 29-year-old during the prolonged Serie A break due to coronavirus, which put yet another unsavoury exclamation mark on a season the Leonessa would sooner forget.