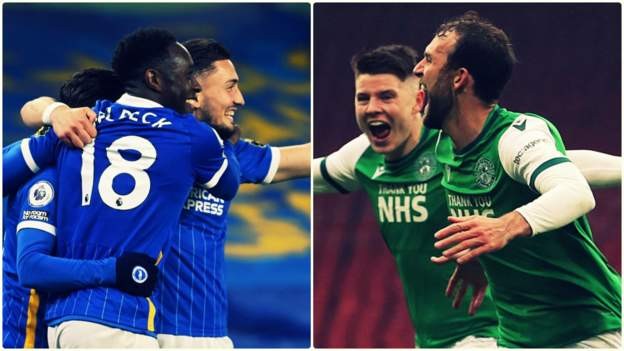 Premier League side Brighton have agreed a partnership deal with Scottish Premiership outfit Hibernian that will focus on player development at both clubs.

The clubs say they will work together to find opportunities for players either in a training or playing capacity to aid their progress.

Hibernian sporting director Graeme Mathie said the agreement "gives all our young players a pathway to aspire to play at the highest level of the game".

He added: "This partnership allows us to plan for how a player might potentially go from Hibernian to Brighton, or Brighton to Hibernian, as two new and exciting options on an ambitious roadmap."

Brighton technical director Dan Ashworth said: "We want to share ideas and knowledge, with a focus on player development opportunities for both clubs, which could include training or playing opportunities for younger players, and friendly matches between various age groups."

Chelsea have worked closely with Dutch side Vitesse Arnhem, while Manchester City are aligned with several overseas teams because their owners control other clubs.

In the past, Chelsea have loaned a host of players to Vitesse, while Watford and Udinese - both owned by Giampaolo Pozzo - struck over 50 deals in just over 10 years.external-link