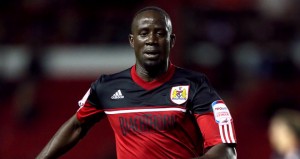 Albert Adomah has been professional

Bristol City boss Sean O'Driscoll has paid a glowing tribute to his Ghanaian winger Albert Adomah for his utmost professionalism despite being left out of the team's pre-season squad after slapping in his transfer request.

The popular winger was back doing what he does best at Ashton Gate two days ago when he scored the only goal in their 1-0 friendly win over Reading.

And the Ashton Gate crowd made their feelings clear when rising to give the former Barnet man a standing ovation just seconds after he had broken the deadlock in the 82nd minute.

Left out in the cold during pre-season after submitting a written transfer request, the Ghana international looked to be on his way out of Ashton Gate after Wigan Athletic tabled two bids for him earlier this month.

But their failure to match City's asking price left the 25-year-old Londoner in limbo and Robins coach O'Driscoll sought to draw a line under the subsequent uncertainty by bringing Adomah back into the fold to face Reading.

The City head coach recalled Albert Adomah from the Ashton Gate wilderness after the wingerâ€™s recent transfer request, and was rewarded with a late winner from the Ghanaian against a side who last season graced the Premier League.

Oâ€™Driscoll also paid a personal tribute to Adomah, calling his attitude â€œfirst classâ€ despite persistent speculation linking him with a move away.

â€œWe didnâ€™t take him to Spain and he hasnâ€™t been involved in any pre-season friendlies, which is not ideal for us and not ideal for Albert,â€ he added.

â€œBut I said a long time ago I wanted the situation sorted, and if it wasnâ€™t sorted after the trip from Spain I was going to play him.

â€œIf the club said â€˜noâ€™ or Albert said â€˜noâ€™ then fair enough, but he needs to play and his attitude has been first class.

â€œThereâ€™s been various offers for him and, like all players, heâ€™d like to play in a higher division.

â€œWe donâ€™t particularly want him to go, but we have to understand the situation and handle it in the right way, which he has; so hopefully weâ€™ll do the same.â€