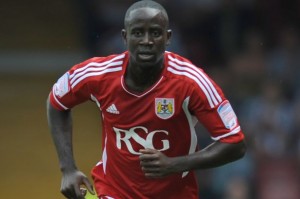 If Bristol City winger Albert Adomah returns from the African Cup of NationsÂ Â with a winner's medal, it will enhance his value in the transfer market, says coach of the English Championship side.

Coach Sean O'Driscoll believes Adomah could be worth as much as Â£4 million when the transfer window re-opens in the summer.

An integral part of the Ghana team that has taken the tournament by storm, Adomah is just two games away from glory in South Africa.

The Black Stars meet West African neighbours Burkina Faso in the second semi-final at the Mbombela Stadium in Nelspruit on Wednesday - and Ghana are hot favourites to go all the way to Sunday's final, where Mali or Nigeria will lie in wait.

Adomah has started all four of Ghana's games so far, including last Saturday's quarter-final win over Cape Verde, and his stock is rising with every appearance he makes.

And that is sure to alert Premier League clubs, who can sign players again in June.

City have already rejected two bids from Championship rivals Crystal Palace for the 25-year-old winger, who has 18 months left to run on his Ashton Gate contract.

Adomah has spoken openly of his ambition to play in the top-flight and he seems certain to leave in the summer.

But O'Driscoll reckons City can cash in on their most valuable playing asset if he returns home next week as an African Cup of Nations winner.

He told The Post: "If Albert is worth a couple of million pounds now, think what he could be worth if Ghana win the cup.

"If Ghana continue to be successful and we can improve him further after he comes back, he could be worth three or four million pounds."