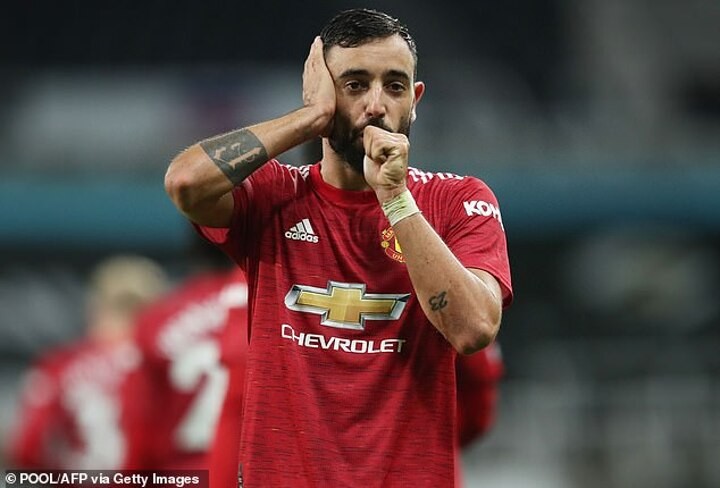 Bruno Fernandes revealed he was shocked after Manchester United team-mate Aaron Wan Bissaka's goal against Newcastle as he said: 'we didn't know he can shoot!'.

United won their second match of the Premier League season against Steve Bruce's side despite the worst possible start after an own goal from Luke Shaw in the second minute.

Ole Gunnar Solskjaer's side quickly responded as Harry Maguire headed the visitors level at St James' Park before Wan Bissaka stole the headlines with a stunner.

The Newcastle defence finally crumbled late on as Fernandes made amends for a saved penalty earlier in the second half and a goal from the right back and Marcus Rashford topped off a resounding victory.

After the match, Fernandes said that the United players did not know that Wan Bissaka could strike the ball so well.

'[We were so happy] because we didn't know he can shoot!' the midfielder told MUTV. 'So it's difficult for us believing he can score because we never see him shooting.

'We were talking about it now in the dressing room and asking him because we all were thinking he wanted to cross and he makes a bad ball and scores.

'But I'm happy for him, he deserved the goal and we always ask this from him. Be more positive, be more in the box, try and improve because he has such good qualities.

Before the international break, United were battered by Tottenham 6-1 at Old Trafford and the Portuguese midfielder insisted that a result like that can not happen again.

'What happened against Tottenham can't happen again. We play for such a big club and such a big team,' he said.

'This club deserves better than that. Everyone needs to be better, starting with me, I need to look at myself first and then at what the group needs to do better.

'Today it was perfect, after that defeat. I think we need to continue improving, don't concede goals, as I said before, and keep scoring.'