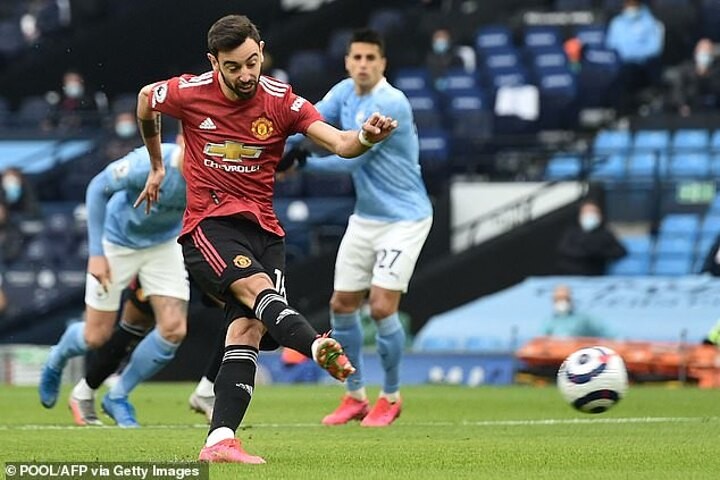 Bruno Fernandes has stressed that Manchester United will not give up hope of winning the Premier League title this season.

Fernandes scored a penalty in the second minute, with Luke Shaw also getting on the scoresheet as United won 2-0 away to rivals Manchester City.

City are still eleven points clear at the top with ten games remaining, but Fernandes indicated that United still believe that they can beat City to the title.

Speaking after United ended City's run of 21 successive wins in all competitions, Fernandes outlined the importance of taking things on a game by game basis, declaring that it is 'a marathon not a sprint'.

Fernandes told Sky Sports: 'We all know it's always difficult to play against them. They are tough to play against but the result is the most important. For now it's not about winning against City it's about performing well until the end of the season.

'Of course scoring in the first minute is perfect because we have more space to counter, but against Tottenham we started with a penalty and we lost. But we remained focused until the end of the game and we defended well. We know we have players who can score. We know everyone can do something for us.

'Maybe we performed better against other big teams and didn't win the games. Maybe against Liverpool we had more chances, but it's performing against everyone. The league is not a sprint. It's a marathon, there's a lot of games to go ahead and we have to do our best.'

Fernandes also commented on his celebration, which saw him put his hands on his ear and suck his thumb.

The 26-year-old explained that the celebration is for his children and also for his wife, who he says has supported him during a 'difficult period'.

He said; 'It's for my kids. My kids are the best of my life and every time I score it's for both of them. It's also for my wife for supporting me in this difficult period.'

Fernandes has made a major contribution for United this season, as evidenced by the fact that he has scored 23 goals and provided 13 assists in 41 games across all competitions.