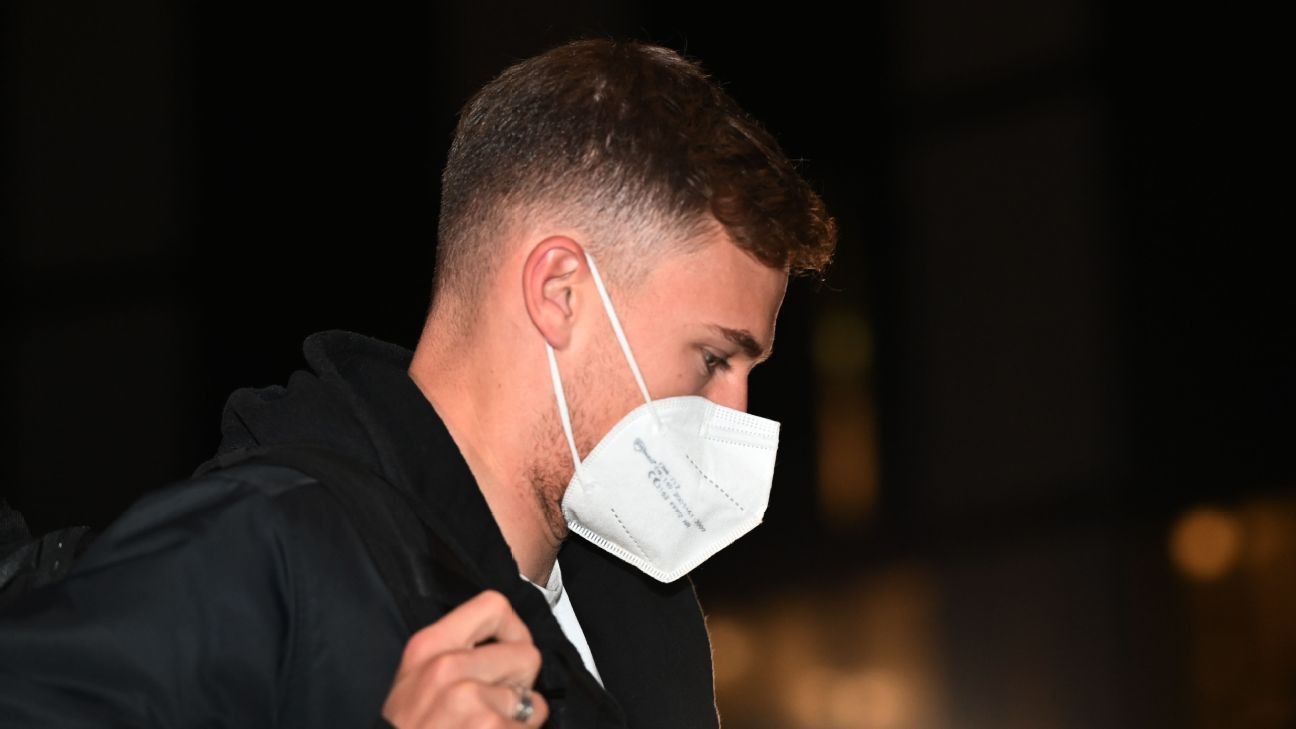 ESPN's lead Bundesliga commentator Derek Rae explains why it's impossible to fully discuss league matters at the moment without the COVID-19 factor, as the pandemic impacts everyday German life.

I realise COVID-19 is not what every Bundesliga fan wants to read about, but it's undeniably having a huge say in the course of this season for players and fans alike. You can't really follow German football right now without understanding that the virus off the pitch underpins virtually every narrative on it. The news that broke on Wednesday confirming positive tests for Bayern Munich's unvaccinated players, Joshua Kimmich and Eric Maxim Choupo-Moting, merely took it to another level.

Bayern coach Julian Nagelsmann is fed up of hearing the word "corona," as it's referred to by Germans, and you can understand why. The manager recently recovered himself from COVID-19, but frustratingly had to be content in the interim with constructing a makeshift tactics office in his kitchen while training sessions and games went on without him being able to attend in person.

Since the coach's return to his office and the technical area, Bayern as a club have felt the full brunt of COVID-19 as the fourth wave dominates news networks at all times. There is no escape from it as federal and state governments introduce measures designed to halt the spread. The RKI, roughly equivalent to the CDC in the U.S., has advised all German residents to reduce their contacts and ask themselves if attending a gathering is really necessary.

At Nagelsmann's news conference before what ended up being a painful 2-1 defeat away to lowly Augsburg, 95% of the talk was about the coronavirus. Most of this had to do with rules forcing unvaccinated players into quarantine should they come into close contact with an infected person, regardless of whether they themselves are positive.

From Bayern's point of view, it helps them not one jot if key players must miss game after game for this reason. These rules have already affected four of the club's players, which has led to the story emerging in the German media that pay docking was on the way for those deciding not to get jabbed. In this instance, most fans in Germany appear more sympathetic to the clubs than to the well-remunerated players.

Since then, Kicker has reported that Jamal Musiala and Serge Gnabry have received their first vaccinations. And while Kimmich and Choupo-Moting will hopefully be classified as "recovered" soon after their compulsory 14-day quarantine, being unvaccinated means no ability to negative-test their way out of self-isolation early, much to their employer's chagrin.

Bans on unvaccinated players have been mooted in other regions of the country, which could represent a huge future problem for any club. The DFL says 90% of players and staff are vaccinated, compared to 68% of the total German population as a whole.

And so, it's again become important to understand and recognize COVID-19 terminology when discussing German football this winter. For example, "2G" doesn't refer to a mobile phone signal, but rather to "geimpft oder genesen" (vaccinated or fully recovered). This is the rule that virtually every Bundesliga club is now going with when it comes to stadium admission. In other words, if you choose not to get the vaccine, broadly speaking, you will be shut out.

Given this measure, is it fair to have more permissive rules for players than the fans responsible for the overall football spectacle and ambience? In German society as a whole, sympathy is running out for the unvaccinated as talk of mandates gathers steam among decision makers.

You will also hear "obergrenze" (upper limit) in terms of capacity as spectator numbers are reduced such as in Bavaria, Baden-Wurttemberg and Niedersachsen, and sadly, "geisterspiel" (ghost game, a game without fans) in the worst affected state of Sachsen, in the East. The president of second-tier Erzgebirge Aue, a team from this region, Helge Leonhardt, called for a football shutdown until the end of the year, only to promptly be told by the DFL that won't be happening.

And don't be surprised when you hear coaches like Nagelsmann talk of "Herr Lauterbach." Karl Lauterbach is the SPD party's bespectacled and distinctive health expert/epidemiologist who appears regularly on TV to advise on COVID-19 matters. The topic is simply everywhere, and for understandable reasons.

Other high-profile figures to test positive this week include RB Leipzig coach Jesse Marsch and his captain Peter Gulacsi, Borussia Dortmund's Thorgan Hazard and VfB Stuttgart sporting director Sven Mislintat. As if all this weren't enough, there is the investigation by the public prosecutor into now-former Werder Bremen coach Markus Anfang, who has allegedly been going around with a falsified vaccination certificate.

To be clear, virologists sounded the alarm long ago. German politicians, caught up in election fever for much of the summer and autumn, didn't especially want to be the purveyors of bad news. Now the health care system is under strain and not even the most popular sport can be seen to have a sonderrolle (special role) or be served an extrawurst (a common turn of phrase literally meaning a special kind of sausage, but meaning special privileges.)

Before his own positive diagnosis, Marsch said it well regarding fans being shut out of Leipzig's next three games: "Of course we're disappointed but the situation in society is more important than what happens in the stadium."

As the emergency deepens in many areas of Germany, the show will go on, but football is not immune.