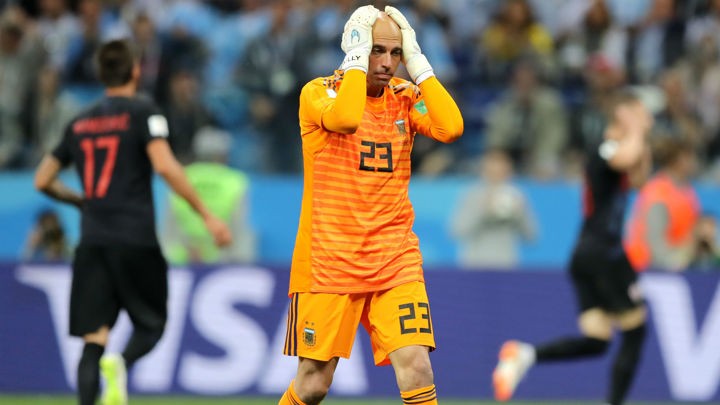 Willy Caballero says he received death threats after making a mistake while playing for Argentina at the 2018 World Cup in Russia.

Rebic seized on the loose ball and fired it into the top corner, setting Croatia on their way to a damaging 3-0 victory.

“With the mistake for Croatia’s goal I went to lift it to give it to Toto Salvio, but I hit the ground,” Caballero explained to TNT Sports.

“The ball had an unexpected effect and it went to Rebic. Everyone thought I wanted to chip it but it wasn’t like that; I never hit a ball like that in my life.

“I wanted to lift it and hit it long because the two strikers were coming.

“The day after my mistake at the World Cup, everyone had my number. I did not have a good time.

“Very extreme messages were sent to me, including death threats. And they made me think a lot about my family and my future.”

After his mistake, Caballero was dropped by manager Jorge Sampaoli.

Franco Armani, then at Atletico Nacional, played the rest of Argentina’s games at the tournament and Caballero hasn’t played for Argentina since.

“I would have wanted one more chance to play and vindicate myself, but I understood Jorge’s decision,” he admitted.

“In addition, Franco came in and played very well. The one who confirmed that he was playing was me.”

Caballero is coming towards the end of his career but, at 38, has just had his contract extended at Chelsea.

He came back into the first team at Stamford Bridge earlier in the season after a series of unconvincing performances from Kepa Arrizabalaga.

Caballero has spoken of his delight at extending his stay in west London, and he also added that he has no desire to finish his career back in his home country.

“I could go back to Argentina to live, but not to play,” he said.

“I started another life when I had to start from scratch in Spain [joining Elche in 2005]. So I never set a goal to return.”