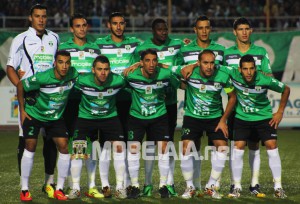 M.O Bejaia were beaten by USM Alger by a lone goal in an Algerian Ligue1 match on Tuesday afternoon.

Bajaia conceded the goal through an 83rd minute penalty beautifully taken by USM Alger skipper Mohamed Meftah as the game was heading to a goalless draw.

M.O Bejaia will host the Ghanaian champions AshGold in the second leg of this year`s knock-out stages of Africa's most prestigious clubs competition this weekend.

Joshua Tijani's lone strike was enough to hand The Miners the victory when the two sides met some few days ago at Obuasi.

In a related development, AshantiGold SC recorded a 2-1 victory over Medeama SC in the opening match of the 2015/16 Ghana Premier League.

Tijani Joshua again opened the scoring in the first half while Fuseini Nuhu added the second and the winner in the second half.