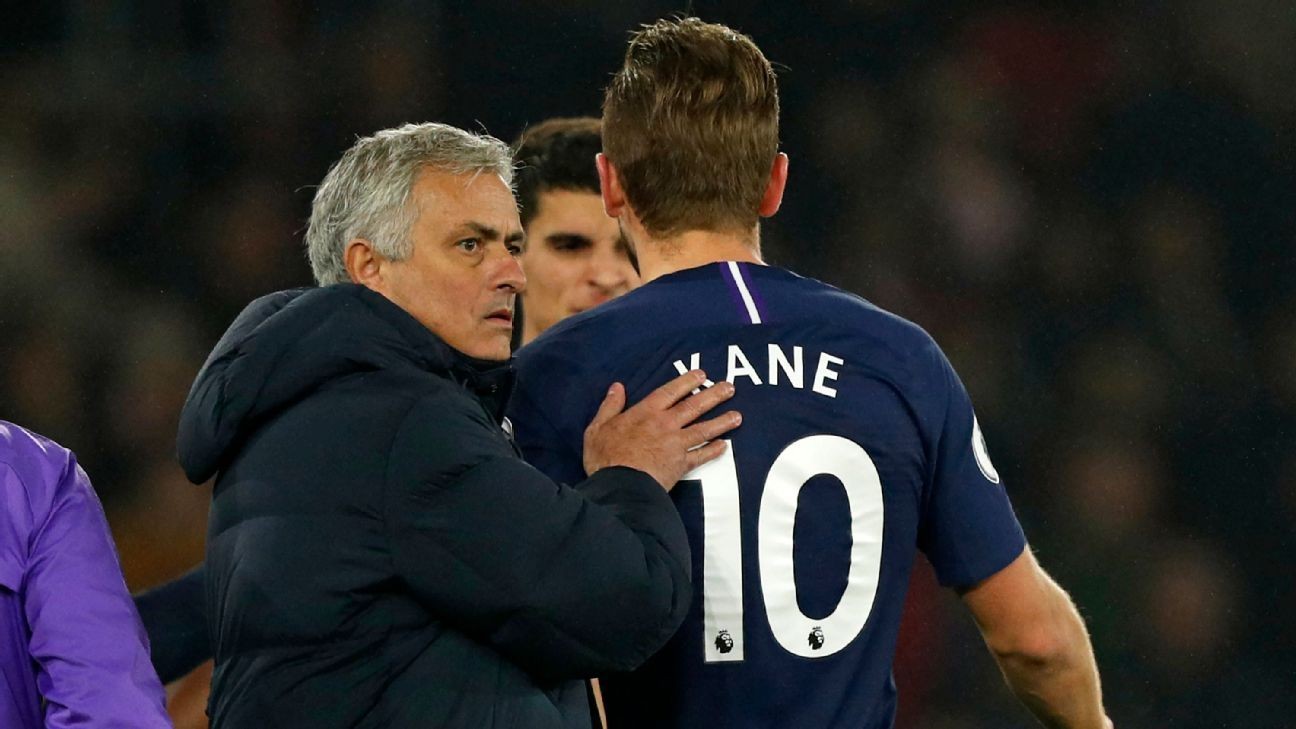 It's the circle of life from a football content perspective, and while sometimes it offers just some time-wasting filler, it occasionally offers some meat, too. Typically, anything to do with Jose Mourinho is pretty meaty.

After Mourinho's Tottenham Hotspur tied Manchester United 1-1 on June 19 -- a solid, if unlikely, result given United's 1.82-0.47 advantage on expected goals -- former Arsenal midfielder Paul Merson played the role of the pundit by declaring that Spurs forward Harry Kane will need to "have a serious think at the end of the season" because he isn't likely to continue his "25-30 goals a season," according to Merson, for a team managed by Mourinho.

There are plenty of reasons to doubt whether Mourinho was the right hire for Spurs. He wears out his welcome and falls out with certain players, and his performances have regressed a bit over the past seven years. But an elite striker will score goals in Mourinho's system. It's one thing that doesn't belong on the doubts list.

Kane vs. other Mourinho strikers

Kane only recently entered what one would normally call an athlete's prime years. He turns 27 in late July and could theoretically command pretty big money on the open market. But a combination of injuries and dead legs has impaired him over the past couple of seasons. In four seasons from 2014 through 2018, Kane averaged 47 club and cup appearances per season for Spurs and scored an average of 34 goals. That output fell to 40 matches and 24 goals in 2018-19; in an injury-ravaged 2019-20, he's contributed only 26 appearances and 17 goals thus far. After averaging 0.71 goals per 90 minutes in 2014-18, he's been at only 0.65 the past two years.

His average in 13 matches under Mourinho: 0.70. He was nearly invisible against United, but it was his first match in nearly half a year. He was doing fine with his new boss early on, or at least, he wasn't doing any worse under the Portuguese manager than he was before Mourinho's arrival. (On Thursday night, he saw two goals disallowed in a 3-1 defeat to Sheffield United but did get on the scoresheet in the 90th minute, scant consolation for Spurs.)

Sources: I won't play for Mou again - NdombeleMourinho bites back over comments on Kane

That number alone gives Mourinho something to refute Merson's declarations, but luckily for everyone involved, he brought his own stats to the table when responding to Merson's claims last Monday.

Harry Kane has gotten off to a slow start under Jose Mourinho, but history and his goal vs. West Ham offer hope that a turnaround could be coming. Adrian Dennis/AFP via Getty Images

While Drogba was effective under Mourinho, it appears the manager mistakenly looked at the "games played" category (186 games) rather than the goals category (73 goals). In fact, in nine seasons with Chelsea -- of which only a little over three were managed by Mourinho -- Drogba was credited with 164 total goals. That's an excellent total, but it's not 186, and it's most certainly not 46 per season. The most he ever scored at Chelsea was 37 in 2009-10, and that was with Carlo Ancelotti at the helm.

Mourinho's other numbers, though, do check out. Ronaldo indeed scored 168 goals in three incredible seasons with Mourinho at Real Madrid (2010-13), while his strike partner Benzema scored 78 in that same period. Milito scored 30 in Inter Milan's 2010 treble-winning season with Mourinho at the wheel, and while he understated the amount of time he had with Ibrahimovic -- he got two full seasons with the towering Swede (2008-09 at Inter, 2016-17 at Manchester United) before Ibrahimovic got hurt and missed most of the 2017-18 campaign -- he got the goals figure of 58 correct.

Now, one could pretty easily point out that a vast majority of Mourinho's examples here are from quite a while ago. From 2003 to 2013, Mourinho was the most successful manager in the game, winning seven league titles in 11 years with Porto, Chelsea, Inter and Real Madrid, taking the 2003 UEFA Cup and 2004 Champions League crowns with Porto and winning another Champions League with Inter in 2010. It was a brilliant run.

Since he left Madrid in 2013, however, his success levels have dropped. He did win the Premier League and League Cup with Chelsea in 2015, and the League Cup and Europa League with Manchester United in 2017, but after averaging between 2.1 and 2.3 points per match in each of his four coaching stops from 2003 to 2013, he averaged 2.0 at Chelsea (2013-15) and United (2016-18). Two points per match is in no way a shameful total, but it's regression all the same. (Thus far he's averaging 1.5 points per match with an injury-ravaged Tottenham.)

While the highest single-season scorer during Mourinho's second Chelsea tenure was Diego Costa, with 20, his United teams indeed produced prolific scorers, with Ibrahimovic bagging 28 in 2016-17 and Romelu Lukaku 27 in 2017-18.

So, is Mourinho good for strikers?

There's no question that Mourinho's pragmatic style is built first around sturdy defensive numbers. When his Chelsea won the Premier League in 2005 and 2006, they allowed the fewest (15) and third-fewest goals (22) of any EPL champion. But when he's had the best goal scorers in the world at his disposal, they've also scored a lot of goals. His Real Madrid teams, for instance, averaged 109 league goals per season and peaked at a outlandish 121 in 2012.

It's fair to be skeptical of Mourinho moving forward. His performance has indeed slid over the years, and when he doesn't have elite strikers, his system isn't one to produce goals on its own -- few do, in fairness. That said, he has always tended to wear out his welcome even when at the height of his game, and there was absolutely no point in him defending himself to the media because of something the aforementioned Merson said.

But of all the things Spurs management (and fans) need to worry about at the moment, all evidence suggests that a healthy and fifth-gear Kane, who scored last time out against West Ham, can still score plenty of goals under Mourinho's guidance. So they've got that going for them, at least.